I had tied up some “FishnDave’s Flashback” flies. I like this simple pattern for early season stained waters, but have found they work all season long, even in clear water.

Another fly that I tied up for the first time this year was a modified Cap Spider. I modified it by substituting a small glass or plastic bead on the head of the hook in place of the 1/124 oz leadhead jighead. This modification helps to slow the fly’s sink rate. 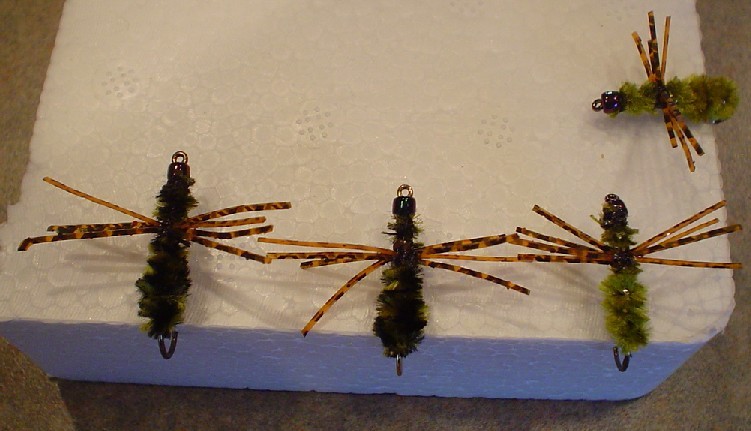 I caught a LOT of fish on these flies, including a decent number of crappies and bass. 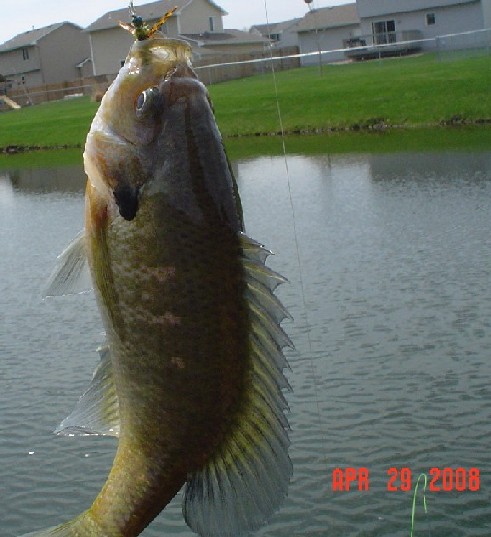 Pre-spawn conditions lasted approximately 1.5 months. As soon as the fish started to move shallow, the bluegills were really starting to hammer foam surface flies. Although the daytime bit was quite good, on calm evenings you could cast a foam fly almost anywhere in the pond and get a good hit within a few seconds! The foam surface flies seemed even more effective with some rubber legs hanging off them. Foam spiders are a good example of an effective foam fly, and I tie up a 2-color foam “spider” that also has a short marabou tail. I used a dark grey-colored foam on the bottom, and a cut-out piece of red or yellow foam on the top. The bright color on top simply makes the fly easier for me to see. Hey, it works! 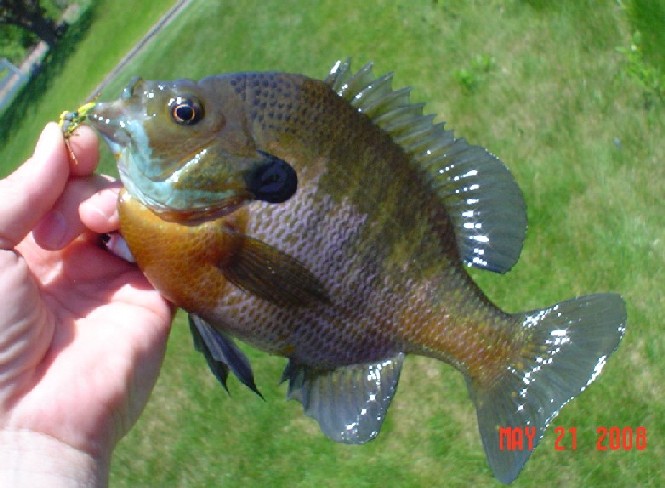 By mid-May, the bull ‘gills were starting to move into the shallows and build nests. I didn’t check the water temperatures in the ponds I was fishing, but the area lakes and streams were sporting water temperature ranges from about 59°F - 62°F.

One thing I’ve found is the largest Bull Bluegills seem to be on the shallowest nests. Walking the shoreline will often send them to deeper water. Wait a bit and they often come back, but still might be cautious about hitting your offerings. So, it pays to practice stealth when approaching the nesting areas.

Usually the bull ‘gills are larger than the females, simply because much of the nutrition both sexes would normally utilize for growth is instead channeled to creating eggs in the adult females. In one particular pond I fish, however, I caught bull and female bluegills that were in the 9” range, which is very good for these public ponds.

When you find the males sitting on the nests, the females will be very close by, usually just off the nest areas in deeper water. They will often come to the surface for a foam topwater fly. If not, try “FishnDave’s Flashback”, or a #8 or #10 Woolly Bugger. 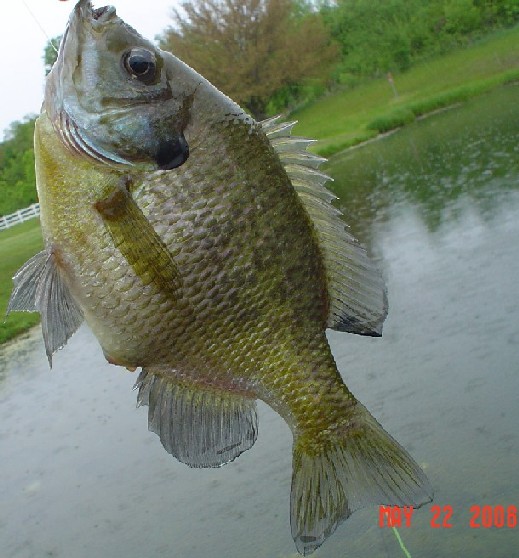 As you can see, during the pre-spawn and spawning period, the females will have swollen bellies. They are also identifiable by the smaller black “opercle” on their gill plate, and duller coloration.

I can’t stress enough the importance of releasing the largest bluegills, especially the nesting bulls. I found an article which makes the case very clearly. Click the following link to read the article:


As I’m writing this on May 30, 2008, the bluegills have not spawned yet. Some of the females are getting absolutely huge with eggs. The biggest look as though they’re getting ready to lay a golf ball!

Best of luck to you when fly-fishing for these fun, scrappy fighters!

Comment by Michael J. Searl on October 30, 2008 at 6:39am
Very well done article Dave!! Your photos are very well done. I need to tie up some of those "FishinDave's Flashback" flies for next spring. I appreciate your sharing. ole Mike

Comment by Zig on October 14, 2008 at 9:45am
While not being able to speak from fisheries standpoint, that condition seems to support cuckholders - which brings another question to the table - Once a cuckholder always one, or is this a period of maturity?

Does a waterway not support a maximum size of fish - regardless of gender?
I can't help but ask the question: If the male bluegill will "outgrow" the female given certain conditions, does that mean I'm not focusing on the largest individual fish in a system if they are females?
Wouldn't a female merely play "ketchup" until a given age (or maturity level)?

Do you think the smaller males that don't have nests, but still try to spawn will actually be fast-growers?

Comment by Bruce Condello on October 13, 2008 at 3:20pm
I've followed fish from hatching until 3 years old with absolutely identical water conditions and diet for every moment of their lives. What I've found is, that if the males are kept off of the nest, either by tank raising them, or keeping them in the presence of larger more dominant males, they will absolutely grow faster than the females. I'm not convinced that this is true throughout life, because I've seen some photos of 2 pound plus females, but it's true that frustrated males will outgrow females, and out grow their brother males who are spending time guarding nests.

Comment by David Merical on October 13, 2008 at 3:10pm
What are your thoughts regarding my comment on "Usually the bull ‘gills are larger than the females..."? I'd read studies on bluegill aquaculture that indicated, on average, male bluegills reached larger sizes faster than the females. The theory for this may be my own, and may be inaccurate.

Comment by Bruce Condello on October 13, 2008 at 3:05pm
Very good article. I enjoyed it. Thank you for taking the time to post it.

Comment by Ethan Lovelace on October 13, 2008 at 1:49pm
Very nice artical, you write very well. Thanks for all your post.

"Thanks Troy…..exciting time to be an angler…."
14 hours ago