Just because the Bluegill angler is going after Monster Gills doesn't mean that he or she may find themself fighting the trophy of a lifetime of another fish species (Bass, Catfish, Pike, Pickerel, etc). Since many Trophy Gills inhabit shallow, weedy lakes one may find a large or even trophy size pickerel on the end of their line as these hard fighting fish inhabit similar waters! Larger Pickerel often prefer baits of 3 inches +, subtle and more natural colors in bait selection tend to be the key (watermelon, green pumpkin, pumpkinseed, motor oil, etc are all good choices). Before the first cast, the reel's drag should be set properly so that a slow firm pull will allow line out slowly but evenly--too tight a drag and the light line that panfish anglers use will break early on in the fight as the large fish makes its initial runs toward deeper water; too loose a drag and the fish will be able to have its way and break you off on the nearest underwater log or rock! Once initially hooked the large Pickerel will make several runs toward deeper water often running in circles around the boat (or for the Shore Angler, the big Pickerel will often make runs laterally along the shore, usually after an initial run toward deeper water) looking for any underwater object to break the line or to throw the hook. Once the large Pickerel fails at its initial attempts to break the line by running toward deeper water or by running in circles around your boat it will always CHARGE YOUR BOAT (or for the Shore Angler, it will CHARGE TOWARD SHORE usually coming right at the angler). This is a Big Fish trick that often pays off for the fish by the surprised angler NOT keeping a tight line thus allowing the fish greater leverage with the loosened line so it can quickly throw the hook. To keep a tight line with the big fish charging you, watch your line closely and the direction it moves and when the line starts moving toward you, reel line quickly and steadily to maintain tension on the line. You will know when to stop reeling as the big fish will break off the unsuccessful charge at the last moment and you will hear and feel the drag run as the fish changes direction and charges again toward deeper water. Continue to play the fish, wearing it out by keeping a tight line and proper drag and using the above tips. The bigger the fish, the more runs toward deeper water and the more frontal charges the angler must sustain--all while maintaining a tight line and good drag. While fighting a true trophy Pickerel, if at any time the angler feels the line tension is increasing to the point where breakage is a possibility (very common when using light lines), the angler must immediately make a slight adjustment to slightly loosen the drag to take the pressure off the line. Once the big fish feels like it is tiring, this is the time to slightly increase the drag, tire the big fish out and bring it carefully into your boat. For toothy fish (like Chain Pickerel and Northern Pike) always have a Boga Grip type instrument or large pliers to grab the fish's mouth when bringing it aboard. Placing hands or fingers near or into a Tropy Pickerel's mouth could quite possibly end with the loss of a finger or serious laceration requiring sutures, so be careful. Once on board, hold the pickerel with one hand under the throat region and the other underneath its belly (placing hands into the Gill region of the fish should be avoided if possible due to possible harm or injury to this sensitive area of the fish)! Hope this information is helpful to everyone and tight lines!!!

Comment by IceWarriorGill on June 29, 2009 at 4:13pm
Hey Chris, That sounds like a brute you tangled with, and they have lots of tricks up their fins!!! You'll get him next time--and now you know where he lives so if you offer him the right bait or lure next time hang onto your rod!!! (Here's a tip....Try a Green Pumpkin Senko in the largest size they make, rig it weedless, and jig it around slowly in the area where you caught him before. If he's got a pulse, he'll hit it!!!!) Hey John, that's a dandy Big Chain ya got there, way to go on catchin a great fish!!!!! 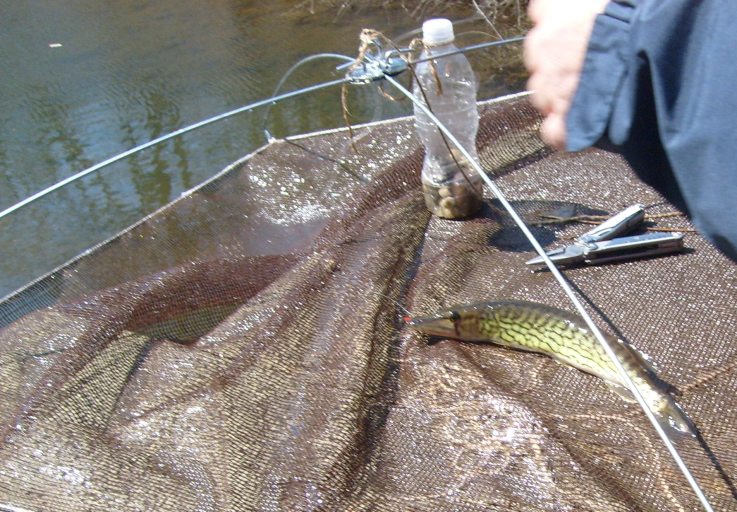 Joseph- They have nets for lowering down off of bridges that you can pull the fish into . 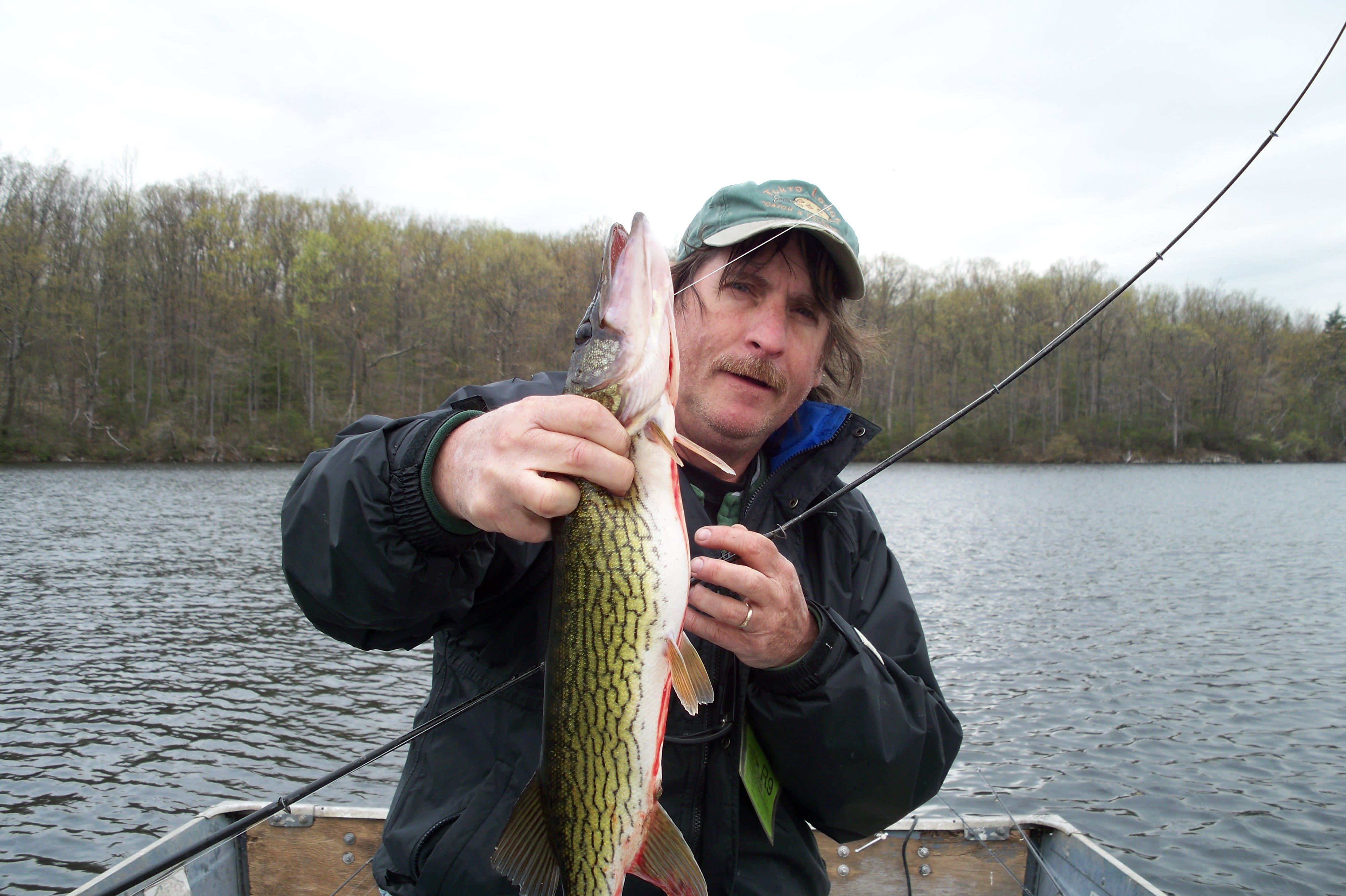 Thanks for this IW...I love Pickerel. My personal best is 24" second best 22"

Comment by IceWarriorGill on May 26, 2009 at 7:21pm
Hey Joseph, Are you fishing from the Bridge or beside the Bridge or below the Bridge? The reason I ask is I've lost several monster fish while fishing from bridges--one was I believe to be a 9+ lbs Largemouth which I had fought for several minutes to the point of tiring him out when he did an interesting thing to me. He allowed me to pull him into the bottom of the bridge, right to the bridge pilings, and I thought to myself: I gotcha now, big guy!! I was so naive and wrong!!! He looked like he was on his side resting against the bridge piling, swaying gently back and forth... This old smart fish had me right where he wanted me; he was using the leverage of the bridge piling and was scraping the hook right out of his big jaw to leave me gasping in disbelief at what I had just seen as he swam slowly away!!! Nowadays, I will never fish from the top of a bridge (based on that painful experience, there are too many ways the fish can get away: scrape hook out on piling, break line as angler pulls fish straight up from the water attempting to hoist fish over bridge, etc...) I always fish from the side or better yet from the bottom of the bridge if possible as you will have more leverage against the fish and less ways for the fish to get away or break you off!!! Hope this helps!!!

Comment by Howard Webster on May 26, 2009 at 6:49pm
Gill
great post and great fish again . I have lost sevral big fish the last few days but they hit the smaller fish I was pulling in. The best grabbed a pearch with 4 lbs test in a river with a current I could hardley slow it down. It lasted less than 20 seconds when it spit out a badly torn up pearch. Of course I wanted to see what the fish was but thats what conservation is all about. The only tip I can add is take your time and don't rush when it happens.

Comment by IceWarriorGill on May 26, 2009 at 6:35pm
Hey Jim, this is the largest Pickerel I've ever successfully landed! It was 30+ inches (I couldn't get an accurate measurement as it was rocking my Kayak so badly I was worried that it would tip me over). My Boga Grip registered it as just over 6 lbs (unfortunately my Boga Grip is not digital or I could have had a more accurate weight reading)! It was a very large specimen and I could not get the entire fish in one camera shot (I was taking its picture while holding it at arm's length in my kayak). It's also the only fish that's ever pulled out of my Boga Grip once it was "locked on" as it pulled out when I first lifted it out of the water (very fortunate that I had it hooked well in its upper jaw). After the quick photos, I immediately released it as its thrashing was starting to unsteady the kayak!!! By the way, that was a Dandy of a Gill that Matt landed!! Way to go!!!

Comment by IceWarriorGill on May 26, 2009 at 5:21pm
Hi Jim!! I feel your pain as well as they tend to be more nuisance than anything else when going for Monster Gills!! With light fishing lines, after a long fight with a large Pickerel, I find incredible amounts of line twist in my line which means cutting large amounts of line off my reel [not fun at all :-( ] I guess if I used swivels most of the time this would alleviate a good deal of twist but I like the more natural presentation without a swivel as Bull Gills have incredible eyesight and can spot unnatural presentations a mile away...Tight Lines!!!

Comment by Jim Barndt on May 26, 2009 at 4:23pm
Just last week while fishin in 20' of water with a 3/16oz jig I cought a Pickerel 24". It did everthing you said in your post. I was useing 2lb. line with with a 4lb shoker leader. My jig was chartruce head with a smoke/blue flake tube. Right now the Pickerel are a real pain in the neck, mostly (hamerhandle's)

"Beautiful. Do you get snow very often?"
1 minute ago

"For Gills and Pseeds  yes the 10th oz SP,Bruce. But for Perch, Bass and Pickerel,…"
yesterday

"I always to well with the smaller ones for pan fish."
yesterday

"Right Bruce....I'm over it already, but Mother Nature rules......"
yesterday