A great start to the New Year weatherwise… sunny skies light southerly winds. The ice has been building up slowly the past 2 weeks and now have a thickness of 7” on the pond. Ice is ready to be conquered.

Earl gives me a call and we free up some time to throw the ice gear together and hit the ice. I swap out the dull blades from last season on the power auger with fresh sharp set… start the auger for a minute loaded up the ice gear and we head off.

As a rule we plan the trips in advance and time them to solunar fish activity cycles with the Fishing Points App. i need to be on the spots during the peek activity cycles to optimize the catch for the time on the lake. Fishing by the numbers for the numbers.

Once at the launch we loaded up the sled turned on the sonars and head out to some of our waypoints using the sonar mapping. The lake was busy with many anglers. Many tip-ups were in plain sight with anglers busy in conversations.

Luckily the waypoints to be fished today were vacant of anglers and we were set to swiss cheese the areas with 6 and 8” holes. Earl grabbed the Manual 6” auger and I proceeded with the gas auger strategically cutting the holes around the waypoints then working the holes towards the bank.

Two holes in and the gas auger started choking on the gas from last season. By recommendation I treated the gas with Sea Foam last March and expected it to be fine. So we continued cutting holes manually which was a burden thru the 8” ice. Stuck cutting holes manually The hole numbers were going to be less and may cut into potential fish numbers for the day.

Earl is at the first hole shallow towards the bank in 6 FOW and he’s into his first fish of the day… a fine B.Crappie at the 10” mark on the Lil Minnow. I proceed to my first hole and discover I left the sonar transducer at the home base. Fishing blind I start the season off with a nice tag on the Lil Minnow. After some screeching runs I ease a 15” LMB out of the hole. With a quick snap I release the LMB into an adjacent hole and continue fishing.

A small school of B.gills were located on a shallow muddy flat with short green weed growth. I alternated between rigs… one loaded with the Lil Minnow which seemed to favor the N.Pike, LMB and B.Crappie bite while the Hybrids and B.Gill leaned towards the tiny tungsten and waxie presentation. 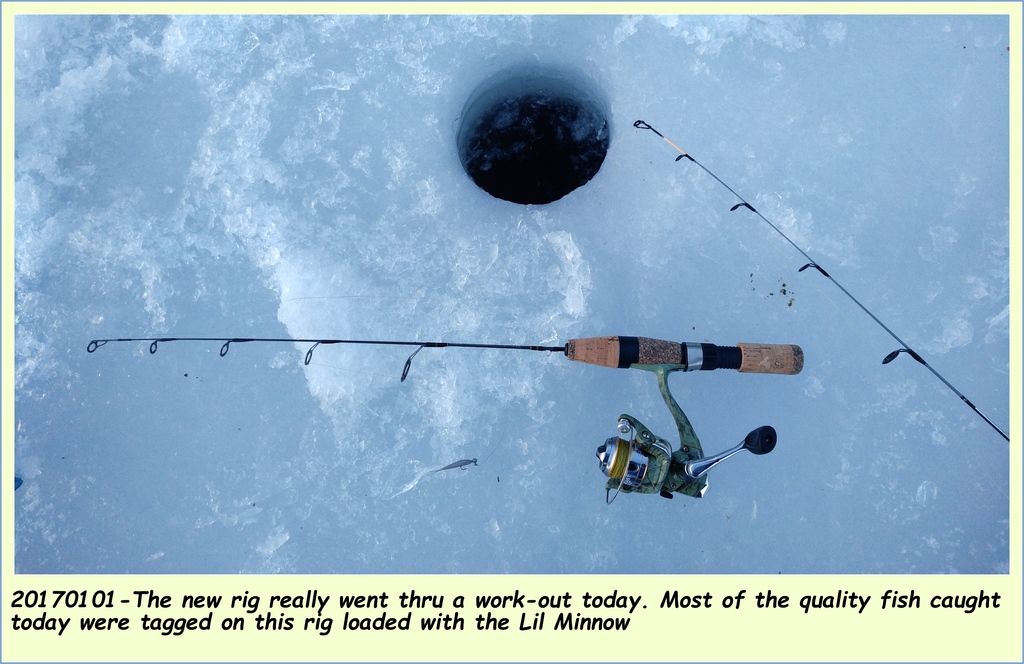 While fishing a shallow 3-4 FOW weed edge I tagged a 24.5” N.Pike on the tungsten/waxie combination. An epic battle ensued with the northern taking off on some spool burning runs. Since I only had 3’ of line out you can imagine the fury of that N.Pike when I set the hook!

Within minutes our bite turned off like a light switch. We utilized the remaining minutes to pack up the gear and call it a memorable trip.

Earl stayed on the Lil Minnow for most of the trip and found a good B.Crappie bite with some LMB mixed in. He ended up at the end of the day with 50% more fish than I considering he was utilizing the sonar. Fishing blind and old school with no sonar I was struggling to keep up with his numbers.

Tagging many fish… especially B.Crappie and LMB’s on the Lil Minnow (untipped) was the highlight productive bait of the day!

Later on that night while going thru the snaps of the tags of the trip I discovered our fish bite exactly coincide with the Solunar activity chart matching a major lunar period on the Fishing Points App. 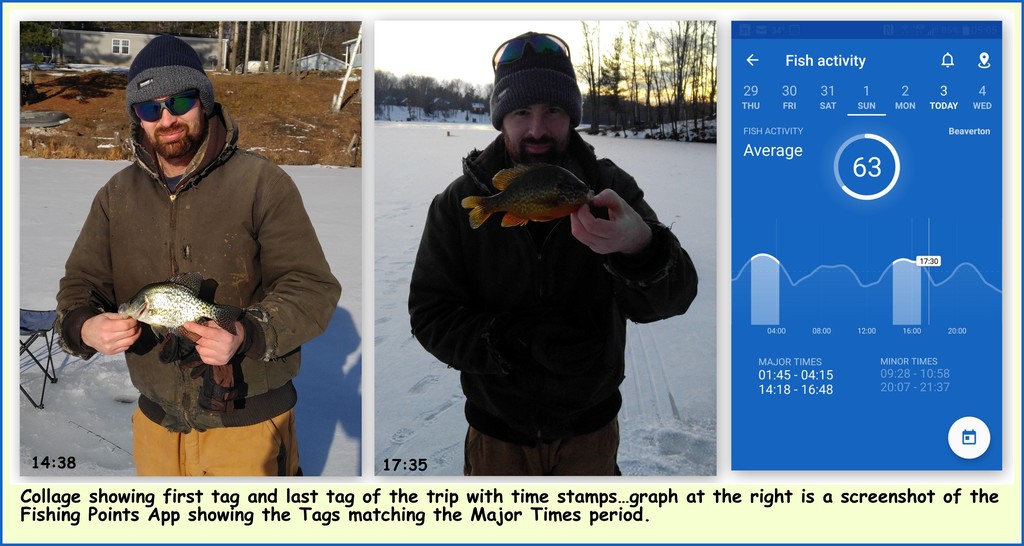 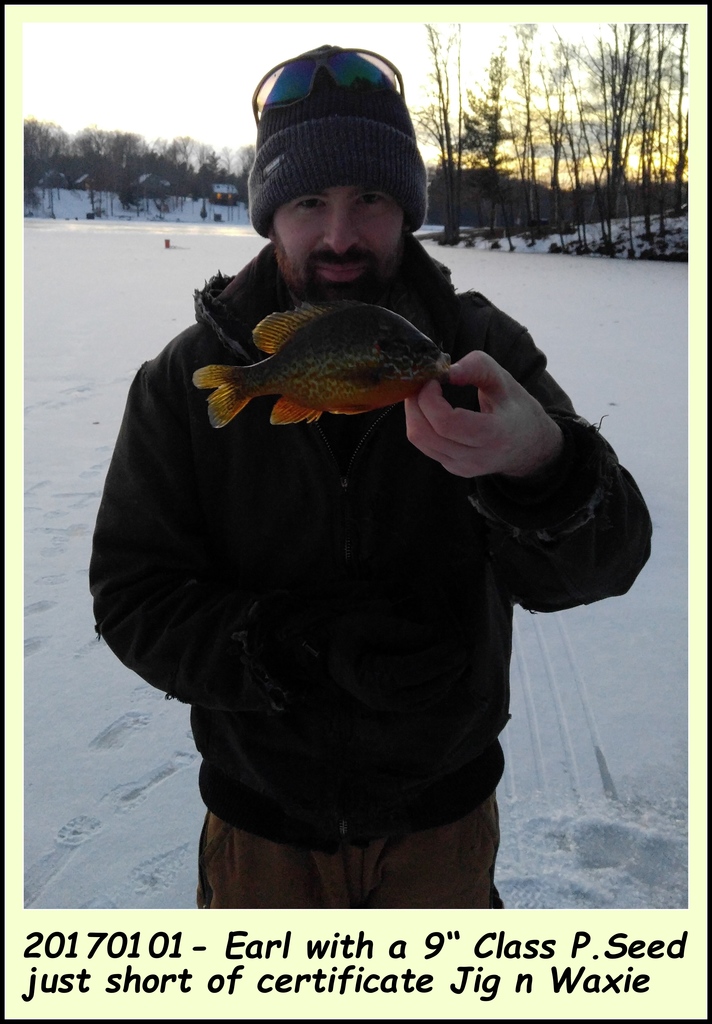 Best B.Gill Of the Day 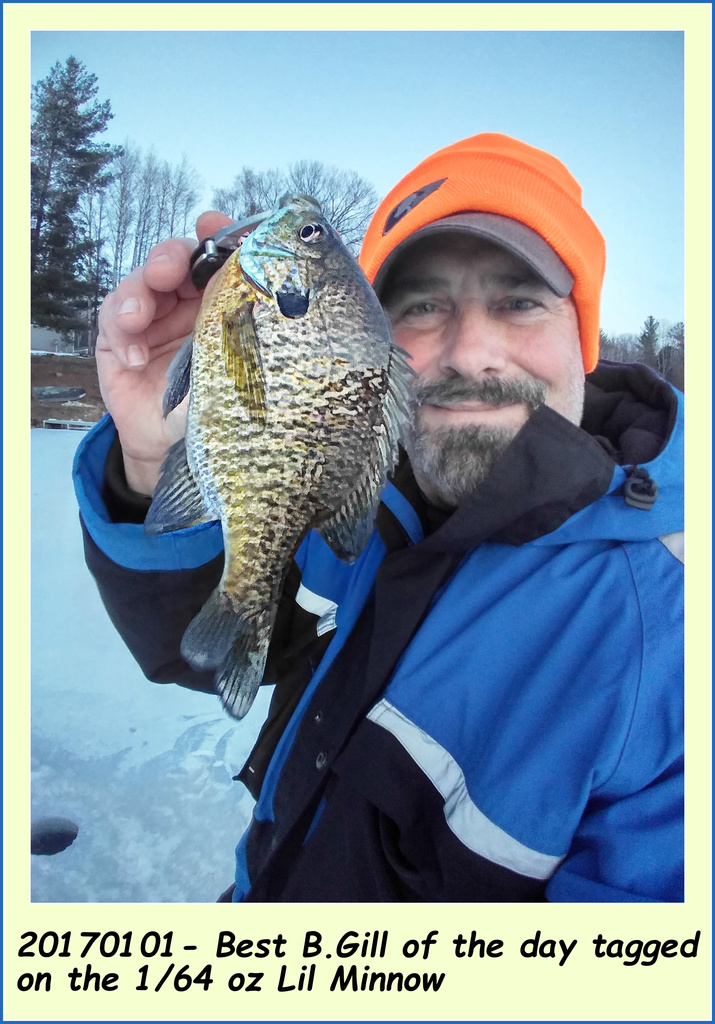 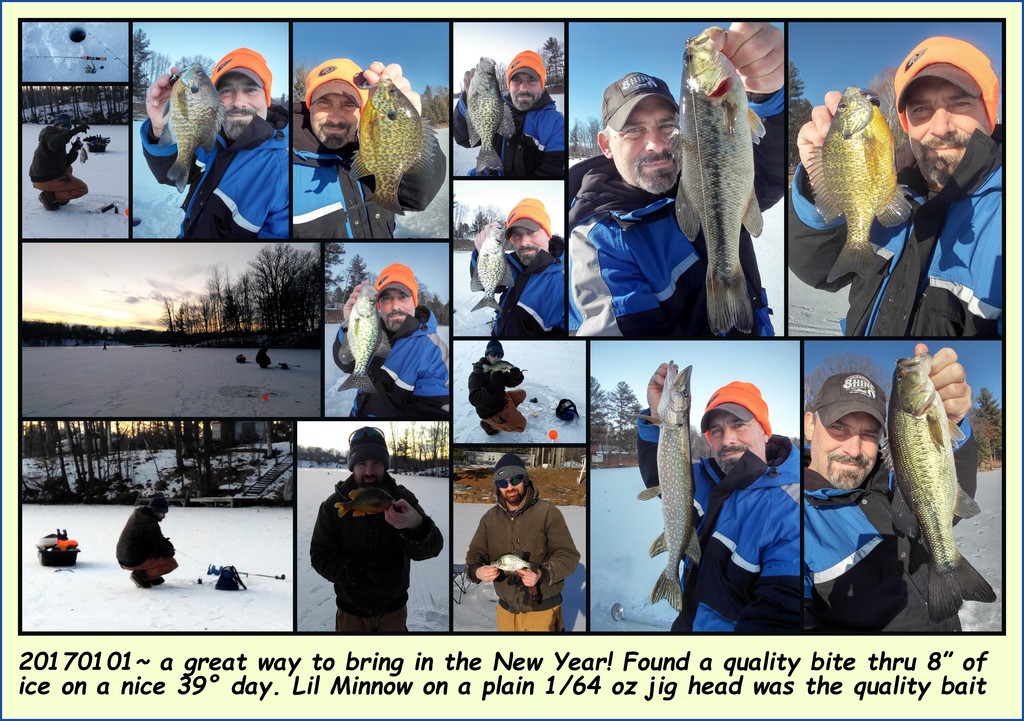 On a side note… Earl was utilizing a spinning reel loaded with GLISS 8# test .004” dia. 2# mono equivalent and was extremely satisfied with his results during this ice fishing trip.

My reels were loaded with 3# and 4# ice braid in bright yellow.

refueled the auger with fresh gas and seems to run 100%... I see a window of opportunity on Fishing Points... id like to catch the late afternoon Major Time Period... hopefully out on the ice on my spot. that certificate fish is in my sights and I'm focused! ...so had to cancel... with these warmer temps along came the rain... might go tomorrow but the temps are taking a dive into the 20's with some snow. i like to time the outings where we are fishing in the low to upper 30's so line freeze doesn't become the issue.

Too early to put a review together on a new ice rig that ill be trying tomorrow. It centers around the Shakespeare Wild Series Ice Spinning Rod model # SWSICE25L (25” lite series rod) mounting a Shimano Siena 500 FD spinning reel I normally use during open water seasons spooled with… get this … GLISS 12# test within the dia spec of 2# mono!!. I’ll be horsing the fish in with this rig. Earl had very favorable results with his 8# test GLISS on the last outing that I have to give this a try.

cancelled the trip ...highs in the upper teens and 20-30 mph winds this afternoon's forecast...

The Ice Period… it’s harvest time for me and the panfish… I feel there is no better time period to conservatively manage some slot limit panfish for the table. The flesh is never firmer than this period of time. We intend to take a few B.Crappies on early ice then some slot B.Gills on the late ice. We will also take a few N.Pike here and there.

With this in mind I started a little search on the Youtube to fortress my decision on whether or not to invest in an electric knife to speed up the cleaning process. I’ve had an electric knife on my Amazon.com wishlist now for a couple months and have been waiting patiently now to push that buy button. Well that buying decision has now been put on hold after viewing this video….

My fastest time for filleting and skinning a panfish is just over 1 min 15 secs per fish averaging more like 1.5  to 2mins on the long haul. This vid changes things. A new approach! Some of the fastest electric knife vids don’t come close.

The vid doesn’t show elimination of the rib cage… which is just a couple seconds each.

So we’ll give this a try!

This shot is looking west across the Little River in Northeastern N.C.
Monday
3 Comments