New moon today!! great fishing during and a few days before and after! 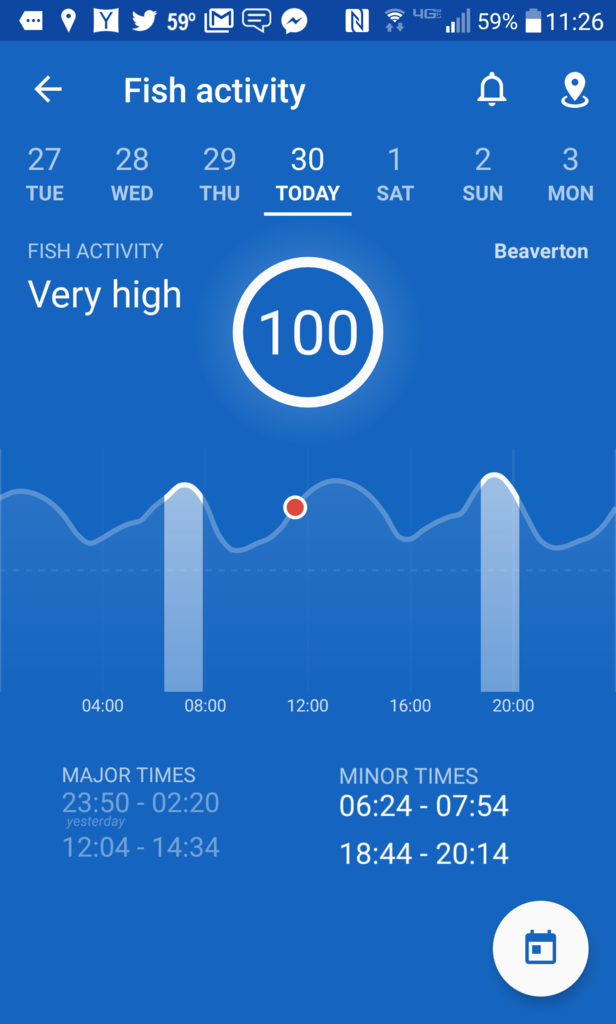 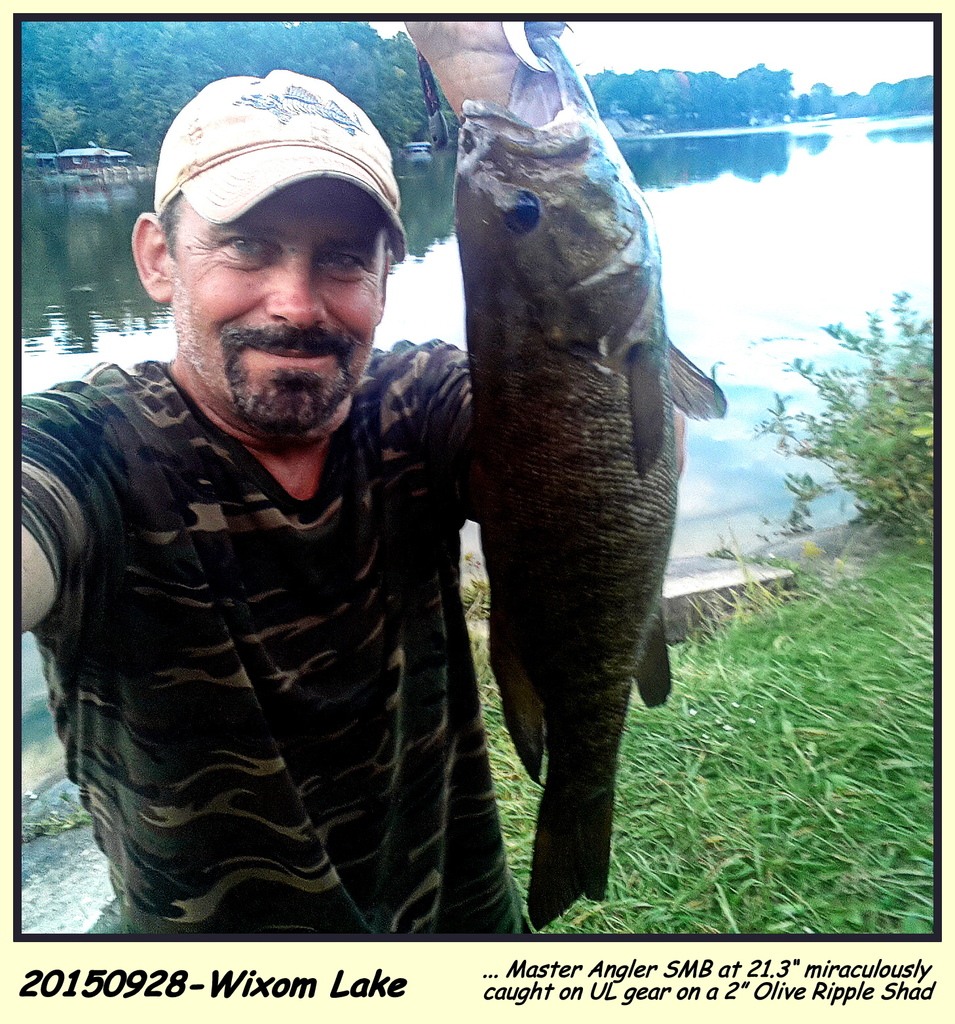 20160928—IVE BEEN SO BUSY CATCHING FISH IT’S HARD TO KEEP UP ON THE FORUM!!...i missed posting the fishing results for the trip on the 28th… I swear I need a secretary lately.

The post summer period has been hot recently with the cooling lake temps… the lake temp registered a cool 69° and the fish are putting the feed bags on. The past two sessions have resulted in a 56 year personal best P.Seed and a discovery of a new waypoint to add into the hotspot database.

Once launched and on the water the deep basins were nearly absent of fish. That means the shallow flats will be occupied with biters!. We made our way to our newest hotspot and discovered bites were thin and further in between then we would of liked. However Connor nailed a p.seed in the +90% Master Angler rating.

The fish were indeed occupying the shallow flats but we were finding them widely dispersed. It got so slow there for awhile I switched out the Lil Minnow for the first time in weeks for the Spring Cricket and started tagging fish at the same pace.

The day ended with quality fish caught by all and we ended just short of the 4 limit 100 mark in fish tagged… not a bad day at all. It felt nice catching some fish on the Spring Cricket as well.

A common nice over all avg B.Crappie 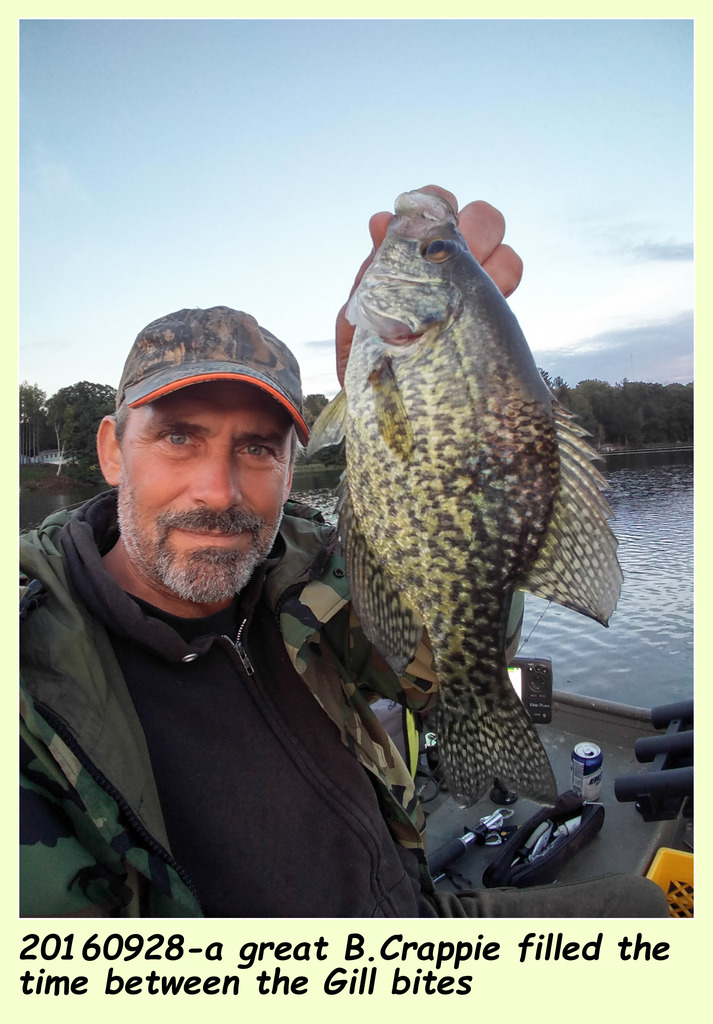 Nice Jumbo P.Seed in the mix 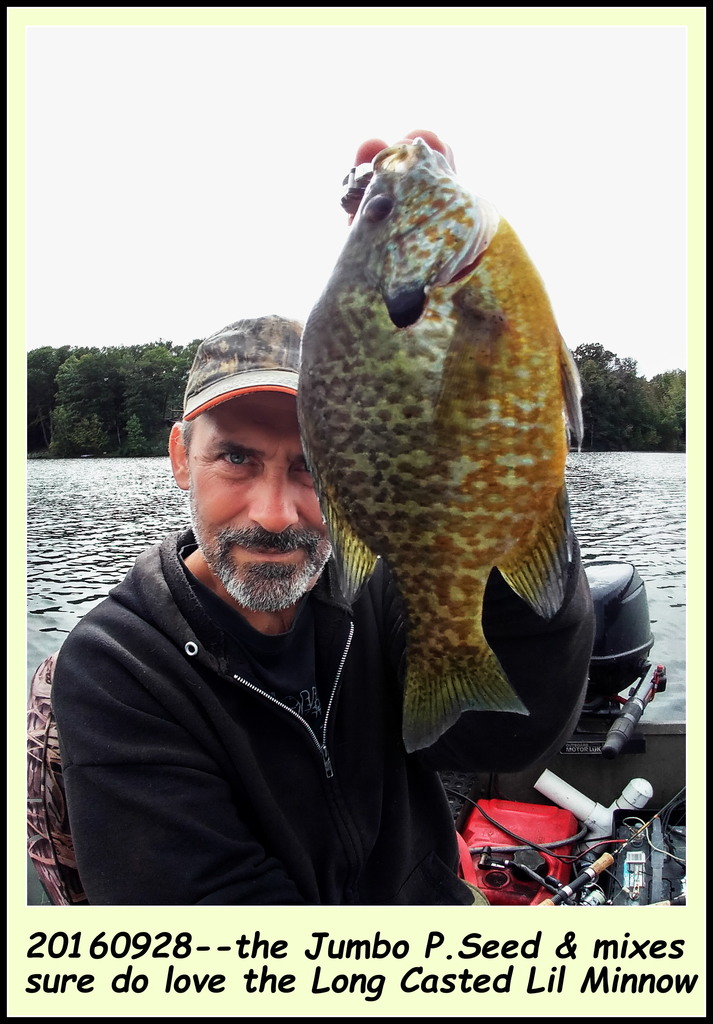 Nice gill on the Spring Cricket 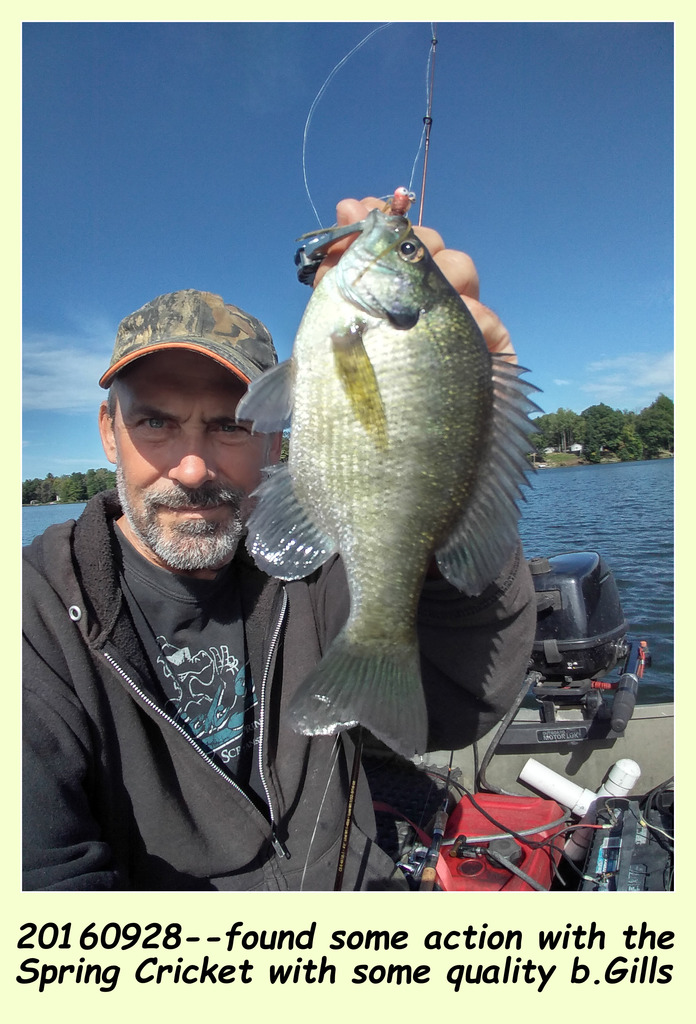 Nice segment of tags for the day… all CPR’ed! 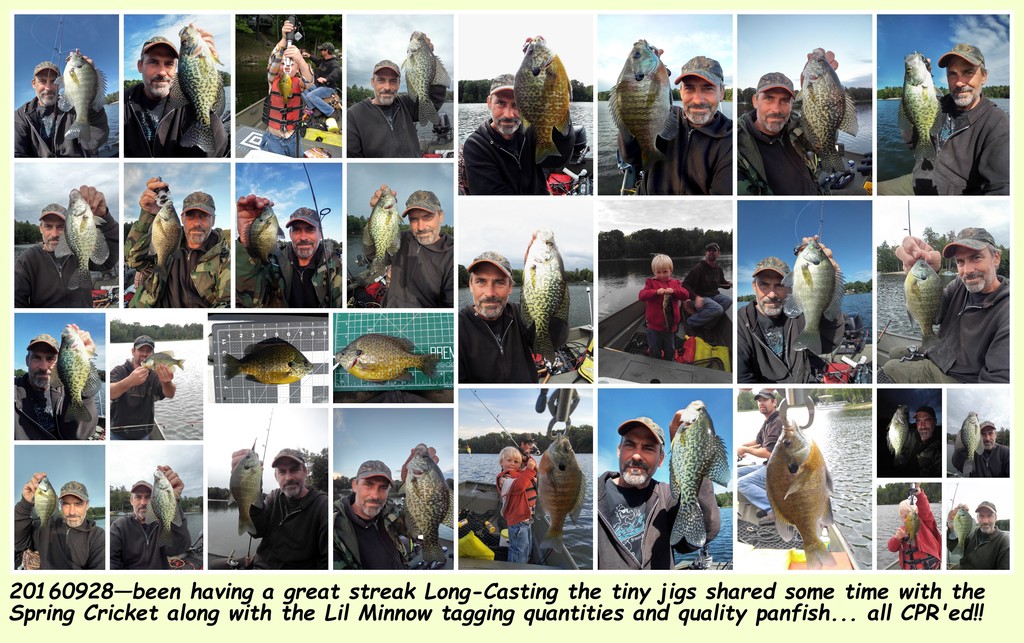 i see a break in the rain... maybe i can sneak out for awhile.

a 14" b.crappie is the focus for this afternoon

20161003-with ice fishing just around the corner we headed out to Northwoods Wholesale Outlet for some needed supplies, new auger blades, ice rods, ice line and also some new GLISS line for the long casting rods tossing those tiny jigs the longest distance.

After a few fishing periods from Spring Cold Water period thru the Post-Summer period this season we determined GLISS to be the line of choice for Long=Casting the tiny jigs. Its properties include, very slick, thinnest and strongest. It tossed the tiniest jigs the furthest in my experience so it becomes the line of choice now replacing ice braid and Nanofil.

Earl and I loaded the new line on a couple of our Long-Casters spinning reels and headed to the lake shore for some testing.

The setups now including the GLISS were conclusively out casting all the other line types previously tested thru the seasons including mono, ice braid, braid, fluorocarbon and Nanofil. Nanofil was a close second. Sensitivity was off the charts similar to other non-stretch superlines with fluorocarbon a distant second followed by the mono.

Thru our testing we did manage to tag a few nice SMB (including a couple dinks) and a jumbo 9” class b.gill. 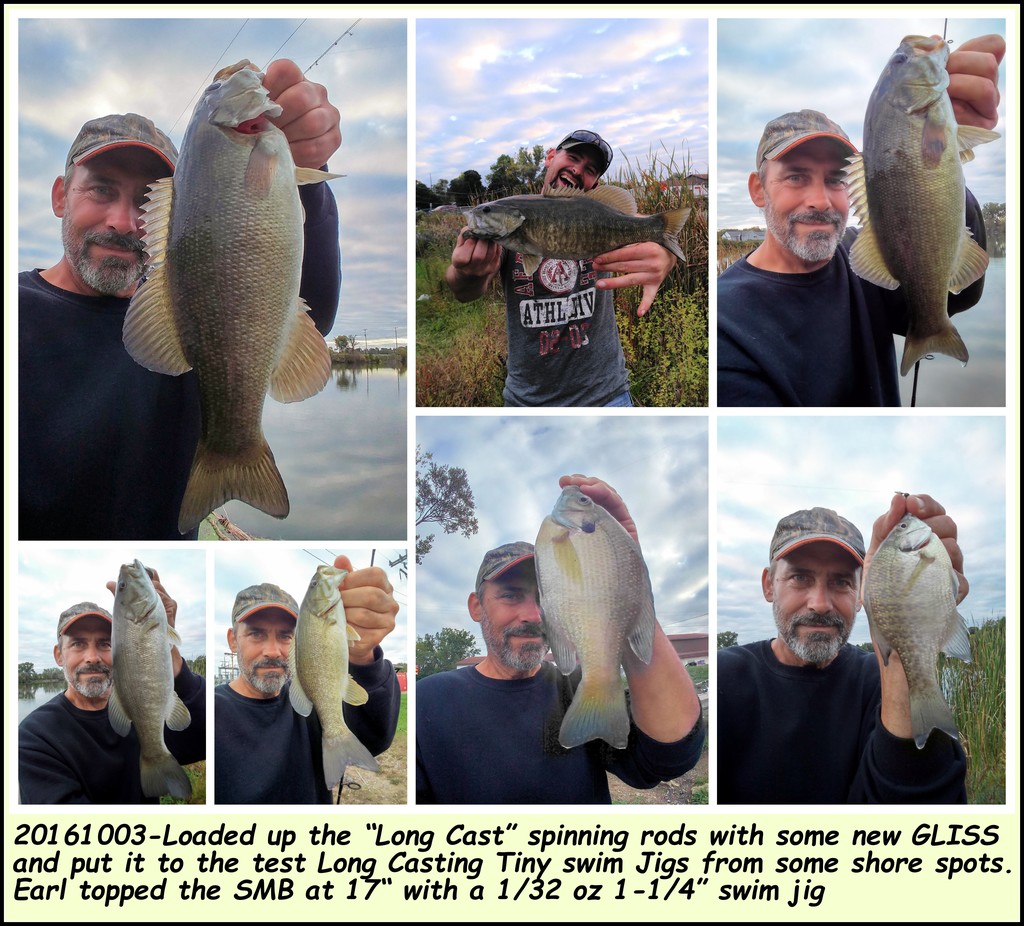 "Very nice Mikey-D......these fish look ready for an early Spring just like me! We're getting…"
yesterday

"Thanks Troy......years ago a failed attempt to develop rural parts of the Albemarle created some…"
yesterday

"Thanks Dick......I love to take the kids out and get away from electronics and all the other…"
Jan 19

"Always great when the little ones want to catch fish too."
Jan 19