20160330… with the great weather forecasted for today we decided we’d better take advantage before the next polar vortex shows up for the weekend… snow again forecasted … gotta love Michigan! The reservoirs were still in no condition to fish because of the muddy coloring! So a small protected natural lake was our choice for the day.

Once at the launch we were greeted with some very similar conditions of the 22nd when we did so well with the numbers and quality of fish. Weather was degrading slowly since mid morning and the wind was starting to kick up.

We noticed there were two sets of fisherman out on the water. As we were rigging the boat for launch I shouted out to the fisherman less than 75ft from the dock and asked how were they doing? Their reply was “don’t even bother launching we’ve been out for a couple hours and haven’t gotten a bite”. They informed us they were using live waxies and worms. Earl responded “we did great with small jigs last week before the snow storm” laughingly they said they would be keeping an eye out watching how well we do.

The water looked slightly clay tinted still like last week. We would be dealing with some wind and chop on the water on our hot spots. Always a tough scenario when using lite lines and tiny jigs.

The fishing strategy today was a continuation of last week’s successful pattern of UL spinning rigs… tiny set-ups with tiny jigs. Our targets were B’Gill, B.Crappie and any preds that get in the way. The way I look at it stick with what’s working. My choice of setup-s were five in number. (3) jigging set-ups from 4-6’ to 5-6’ UL spinning with 2 to 8# Super Lines. With GLISS weighing in with 8#lbs.

Earl and I connected with LMB s in our initial casts!! As we continued our controlled drift along the shore pitching the untipped Jigs shallow and parallel to shore the bite shifted to B.Crappies and we anchored, CPR’ed till the bite faded. The other boat asked to pull alongside to see what we were using as technique. As they pulled up I looked to see how they were rigged. They had medium spinning rigs which looked like 10 to 12# mono with fixed bobber rigs with worms and waxies loaded on the hooks. One rig was setup with a wacky worm. I offered them some Power minnows… they declined and said they had something similar to use in their tackle and shoved off. We continued drifting the shoreline. The fisherman thanked us again for the tips and then eventually retreated with a skunking. Been there and done that! Everyone has!

As the wind continued to increase the bite slowly faded away…the wind chill finally got to us and we retreated to the windward side of the lake. The water temps were a couple degs warmer and we settled in to fish the calm waters. I caught my BFOTD at just over 12” casting a tiny pink curly tail on a 1/64 oz jig head… then a few more B.Crappies fishing alongside some laydowns. Earl caught on quickly shortly thereafter tying on the same jig. He then hooks up with a 14” class B.Crappie… his personal best!

Rain started heading in our direction and we called it just in time.

took a skunking on the B'Gills...

Popular set-up of the day:

My favorite tool for the day was the 5-6’ Diawa Spinmatic, Mitchell 310 attached loaded with the new yellow GLISS line! 8LB test with less than 2LB test mono Dia. Maintained contact with the jig even in the wind and casted like a dream. I pulled a junior N.Pike from the bottom of the lake that buried itself in the weeds during the fight. N.Pike with a pile of grass and muck. Awesome stuff! 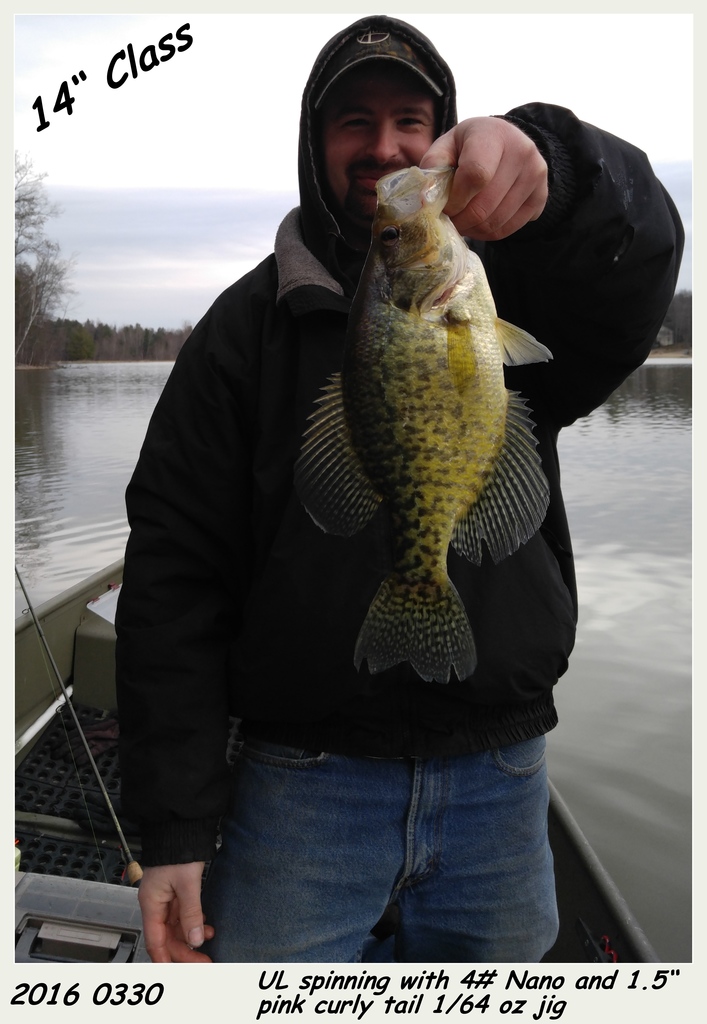 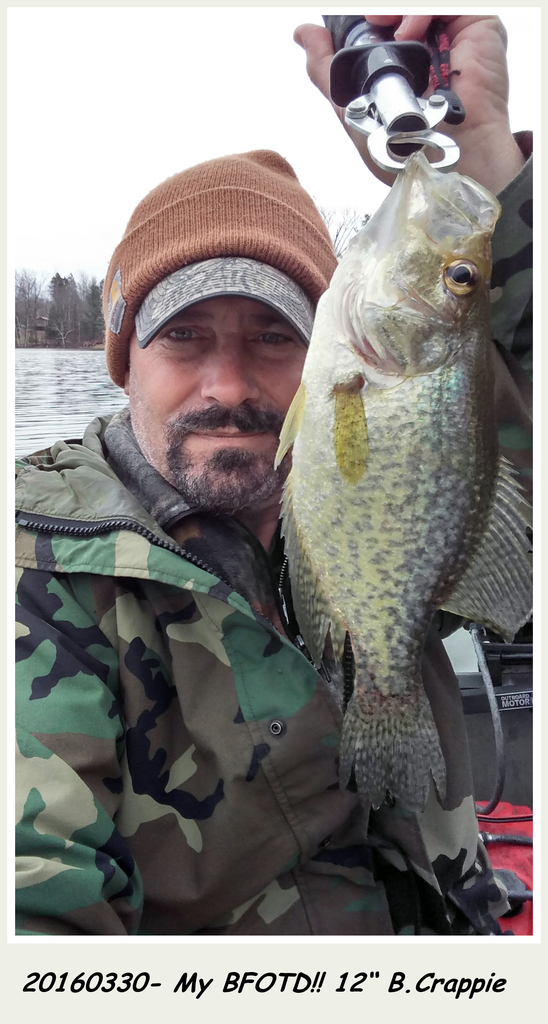 Collage Composite of Some Snaps of the Day! 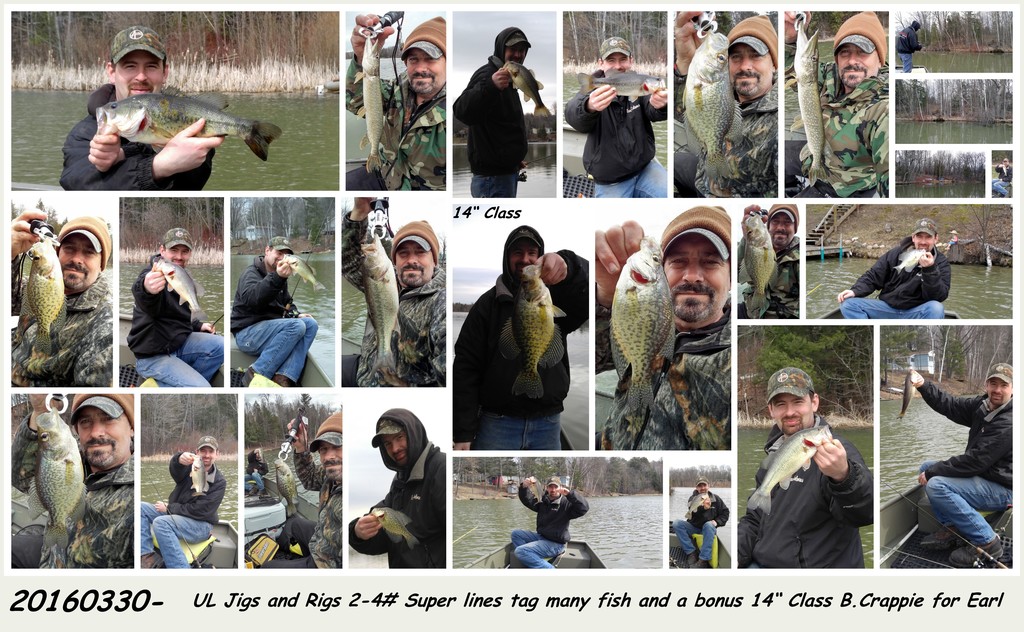 …Michigan fisherman today officially starts the 2016 season... make sure you procure those licenses!

… looks like the polar vortex will have a cold effect on the fishing next week... we've been having success in the shallow muddy flats in the 3-0 to 6-0 FOW range tossing tiny plastics in the 1.25 – 2.00” range on 1/64 – 1/32 oz jig heads untipped and un-bobbered. Thin Super lines were key for their strength , thinness and extreme castability and feel even into the wind.

Weather has been brutal the past couple outings with some wind chill, sleet and rain. Next week we may have to break thru some skim ice along shore to get on. The successful cold water pattern weve been on is to tempting not to continue addressing. Dress warm and keeping the core warm and dry is key. Foul weather gear or ice fishing bibs and coats may be important this time of year. Big fish are synonymous with cold water patterns. Tough to ignore.

…with lows in the teens, snowstorms and now lows in the single digits coming up in the short-term forecast... ice around the edges of lakes... its a transition fishing period here again in Michigan. havnt been able to wet a line in nearly a week ...probably not for another... frustrating.

… skim ice on the lakes the past couple mornings… deep freeze coming this weekend. A cool start to next week and then a warmup. We were greeted this morning with a layer of fresh white snow approaching the 4” mark. A cool slap in the face.

A two week period with no fishing!... and once on the water next week who knows what the fishing will be like! Low 40’s water temp is not a predictable fishing temp for patterning the fish bite.

We’ve done great finding fish the past two outings so we’ll continue with what worked for us. Twitching the tiny swim jigs…. CANT WAIT!!!

Tim Cotton commented on Jeffrey D. Abney's group Friends of the Fliers
"Caught some good ones this week.  "
yesterday