In your past experiences, do the fish start moving back to shallow water this time of year? Although reading your post, you seem to do quite well in shallow water all the time. I plan to get out later this week.

Catch a few nice bluegill on the early and late day bite.........I begin heavy Fall crappie fishing with the first cold front in September........needless to say we are eagerly waiting the passing of this major hurricane which could result in a major fish kill in our region.........some places will get 30 inches of rain according to local weathermen which is terrible for swamp turnover and hypoxia...

...dang hoping for the best outcome possible for that storm thru the carolinas... be safe!

looking forward to seeing your posts of those magnificent specimens, b.crappie,y.perch, b.gills etc thru your area Jeff

I rely heavily on the historical database in my archives as well as input from the media sources… for me I will continue targeting the favorite… B.Gill bite. But as the water cools the B.Crappie and SMB s bite start turning on to high. This is hard to resist… so I go with the flow.

The tiny jigs are hot for my neighborhood till the ice starts to form… numbers will be down but flesh quality will be up so I’ll harvest a few… a couple SMB in the 15-17” range and a few b.crappie… enough hopefully for a few meals.

The deep water bite has been off for me this year… only one lake formed a thermocline at the 15-17’ level but found no fish activity… I was disappointed. Many fisherman are very successful at those depths. When I could not spot anything on CHIRP sonar at those levels during the summer periods I retreated  back to the shallow flats no deeper than 9’. My personal goldmine the past few years. John Grimes you are correct … shallow was my main area of focus.

I’ll be throwing a lot of Micro jigs, 1/32 oz swim jigs to tag that certificate B.Crappie as well as the SMB s

about to get my honey do’s done and havent been fishing in a month or so, and to be honest its been so scalding hot i didnt really care to.  Fall is my favorite time and i will be going deep from 15-20 ft deep.  shell crackers are already being caught at 20ft by crappie fishermen on crank baits.  i will target old creek channels that has submerged old creek banks on each side and deep humps where there are horn snails.  bait of choice for me is a 1/12 to 1/8 oz kastmaster spoon with an1” gulp minnow on a salmon egg hook to replace the treble.

as the temps drop i will move to the deeper creek mouths and some of the deeper mud flats where i will break out the drop shot and a segmented blood worm.

good luck to you guys.

I agree… what a hot summer…. Timing those solunar periods seems like I was always situated in the middle of the day, high heat in that tin oven box of a jon boat… lol… kept hydrated and waded the sand bars often to cool down.

It seems like you fish parallel to methods that Bill Modica outlined here on BBG… deep with the tipped spoons… very effective. I used to use vertical slab jigs with short chain then hook tipped with waxies…

Wish I had access to red ears just not available this far north in Michigan for some reason.

Love the drop shot method… historically caught some nice fish … yeah mud flats one of the most effective way of covering the area.

in fisherman ran a show using that spoon setup several years ago and i believe it was that Bill dude that told Doug Stangey about it.  i like it.  it keeps the bait in the zone longer even if they are suspended a bit.  the only thing was i couldnt find any of those 210 hooks so i use a red salmon egg hook.  the only problem is that they are off set hooks and need to be straightened in line because if not they tend to hook funny and more apt to injure fish.

lol, i stole the drop shot idea from Bill Dance.  i even use a catfish rod with a 2-3oz sinker to find good muck bottoms like he did.  just drop it down to bottom, raise it a few feet and let it free fall.  if it feel like it sticks, then you have a muck bottom.  couple this with a side image to narrow down hard and soft bottoms.  this is good in late winter when the midge fly worms start to emerge, then the bigger fish will move up shallow in february or march and gorge on the emergers.

i didnt start really using the solunar tables until you post your successes using it.  now, ive had too much if those successes in catching fish using that app you recommended to be a coincidence.  so thanks for that.

i read some techniques from Jim Gronaw in game and fish, mainly shallower water float and fly type of stuff.  i think he is more of a bank fisherman though.

yeah, i wish we had those pumpkin seeds like you guys have up north.  those are some nice fish.

~~<")))))><(  …had a great time tagging numbers and quality fish including a Master Angler B.Gill Micro-Jigging the 6-9’ weedy flats targeting weed edges and floating slop. I set hook into a huge fish that stripped out line quickly without letup… I had to lift off anchor and follow with the trolling motor … it was an epic battle that the fish  sorry to say  eventually won. 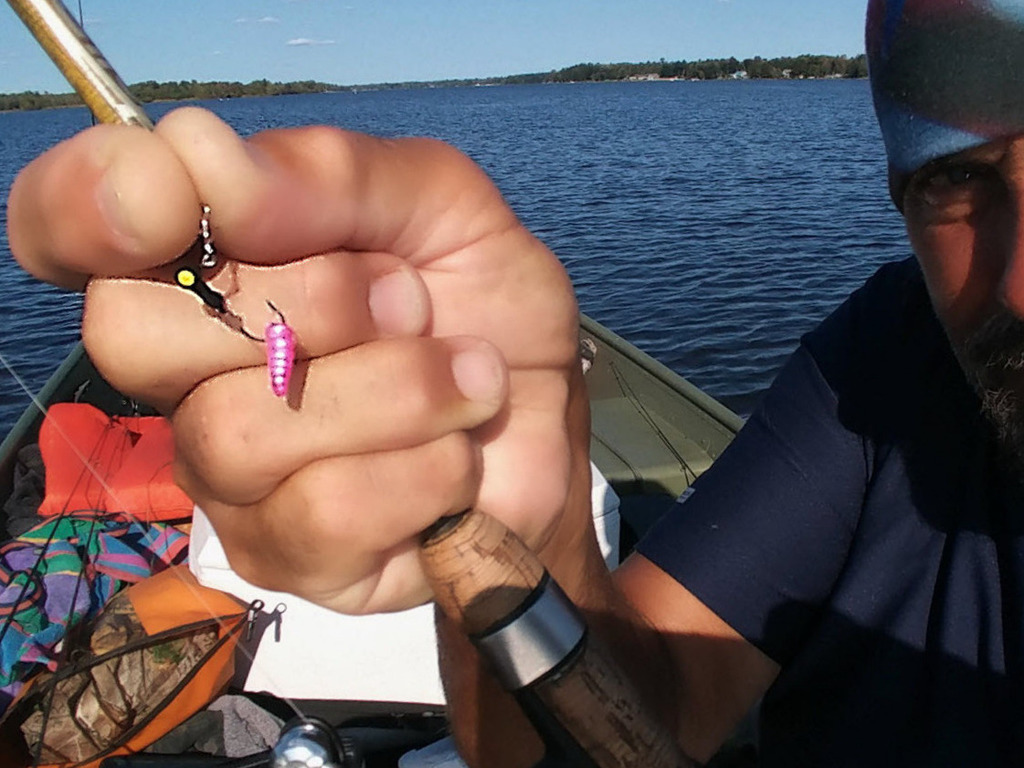 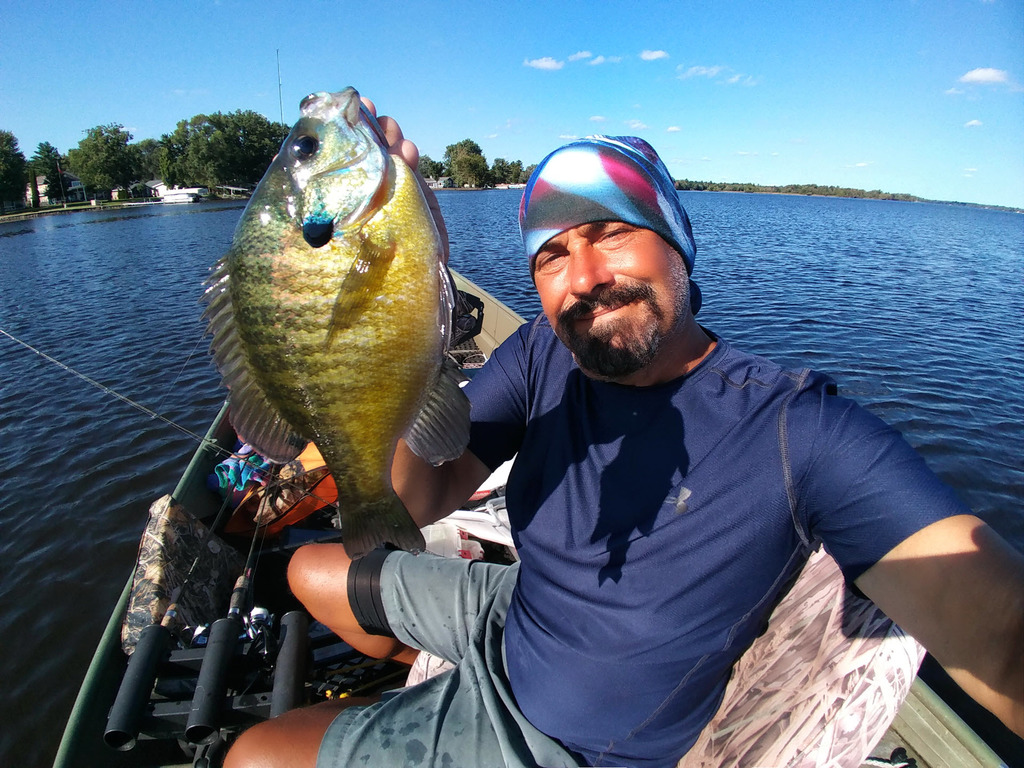 Collage of some of the tags 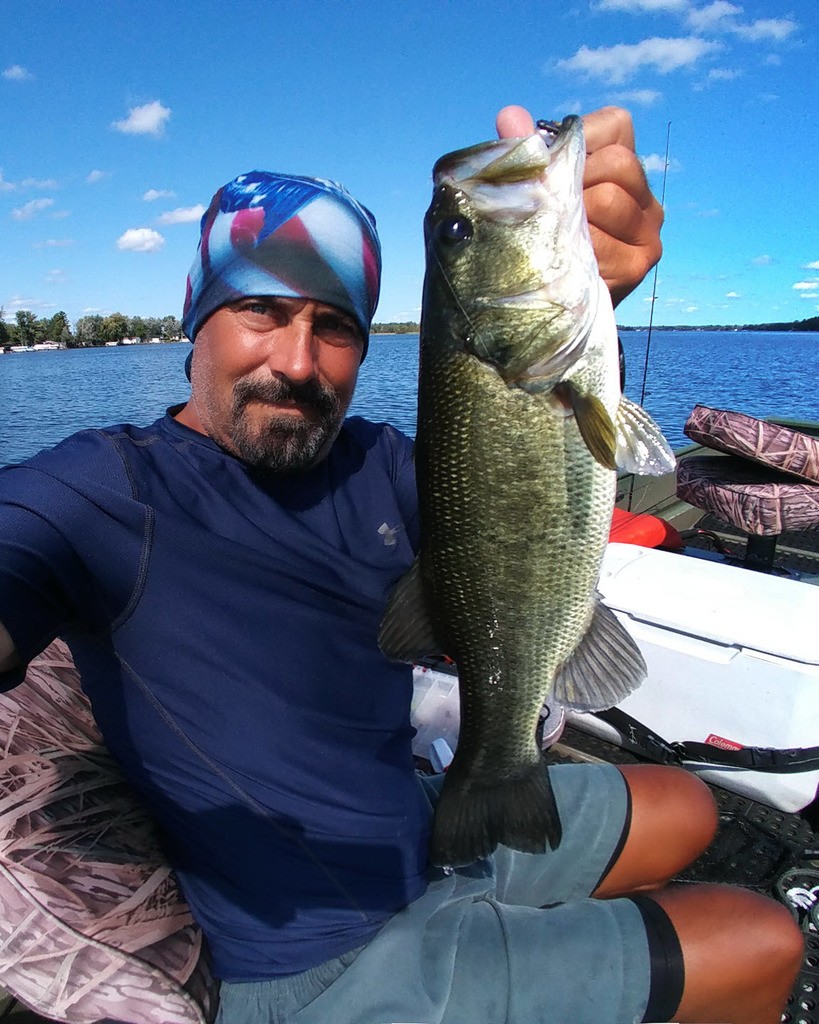 Well , My strategy for post summer fishing is this , I will let them grow and get bigger and get after them next spring with a vengeance. My two surgerys this year , rotator cuff and hip replacement , has kept me one the sidelines  , the only fish I catch are " On Sale " right now. This is the time of year when I usually change gears from fishing to hunting anyway , I have to get ready for a big fall hunting season.  I already have cameras out and have some varmits that need some attention !  Hogs are a big problem and going to have to thin them out plus some other interesting critters that need some attention ! I promise in the cold of winter I'll make sure my tacklebox is in perfect order  and I will get after the bluegill early next year , but in the meantime I'll be at the Crappy Cabin , cooking, hunting, watching ball games , setting around the fire , and watching the leaves change colors. Get ready I'm coming back and will give yall reports of Fall .    LOFR 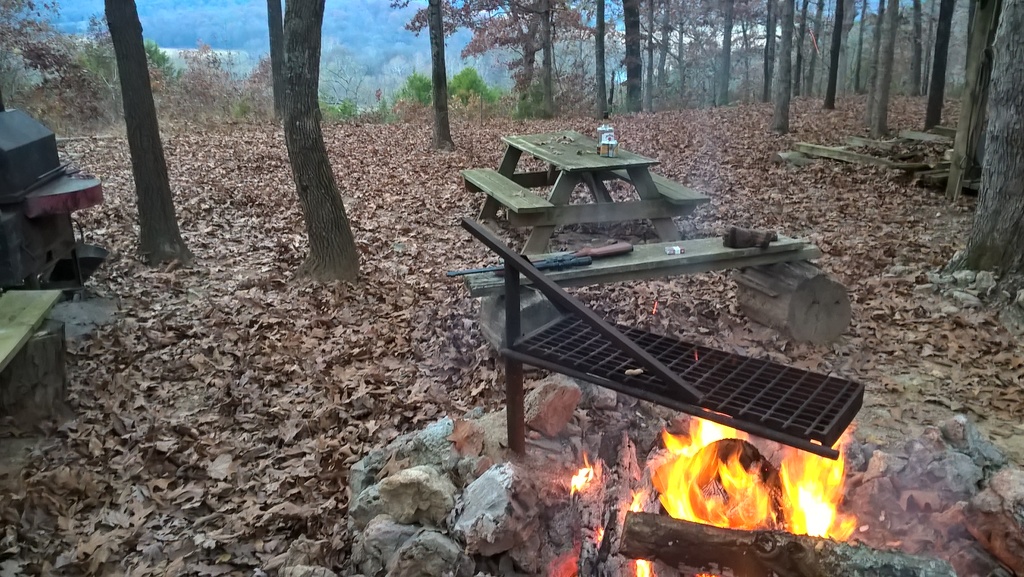 Sounds like you are on the track to some good therapy there for sure. Cabin, cooking and hunting sounds great!

Some great shots of prey on the cam… wow… you should be passing the time well!

20180918-my historical early post-summer pattern continues to hold up with some nice trophy sized fish including a Master Angler B.Gill and good sized channel cat at 92% Master Angler Rating. 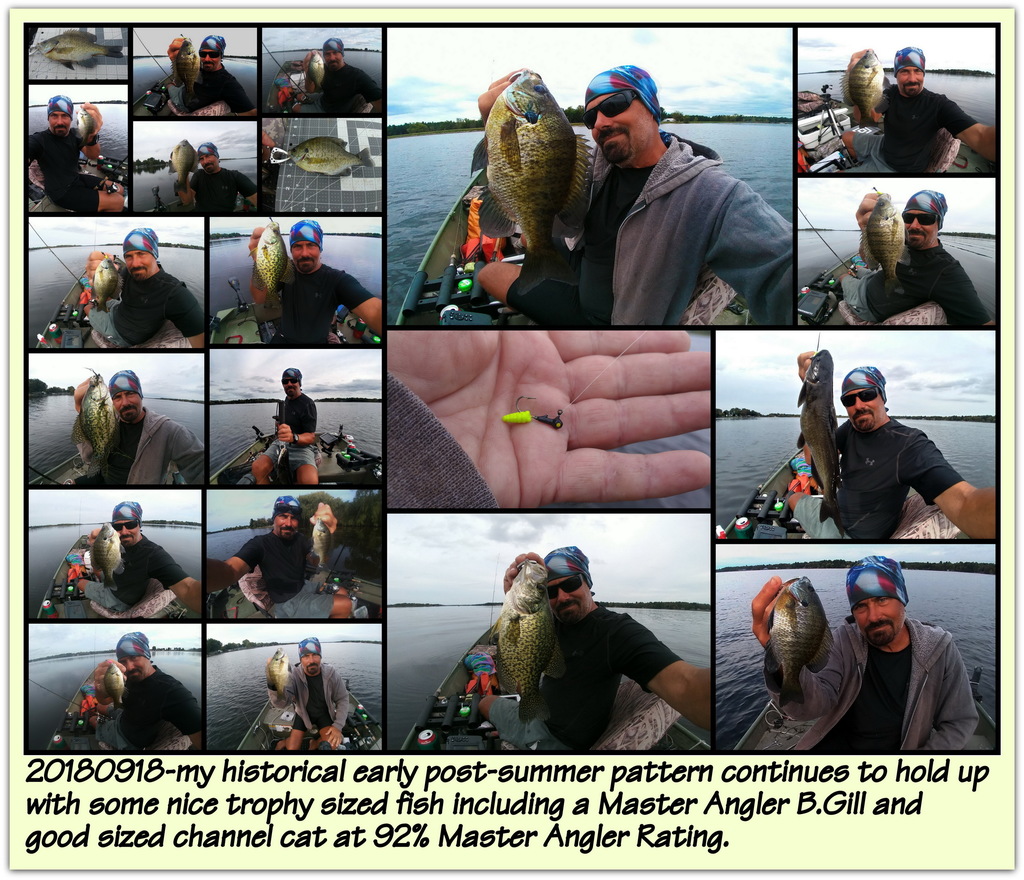 This shot is looking west across the Little River in Northeastern N.C.
7 hours ago
1 Comment