Merry Christmas to all the folks on Bigbluegill. Wish you were up here in WI to help me clean up all the snow. JR

i have a 2.5 acre farm pond last year we could see all kinds of blue gills along the edge but this year never seen one or caught one, just crappies. i killed this pond off 4.5 years ago and restocked per DNR recommendations. we have caught the full range of crappies from small to 12 inchers any input would be great. there is large mouth bass, catfish ,bluegill and 100 black crappieswhen i restocked it.

The rest of the ice fishing story 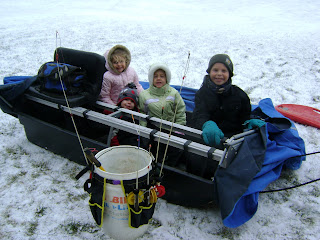 After we took the kids back inside to their mothers and their eventual naptimes, I headed back out with my mom and dad to try and figure out how to fill up a 5 gallon bucket full of them pesky little bluegills. The bluegill were hugging tight to the bottom (according to my good friend Vexilar) and werent moving around or interested in eating much. Typically when we… Continue 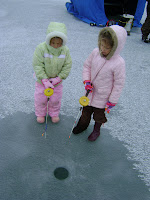 Literally. It wasnt but just a couple years ago and I was changing their diapers and rocking them to sleep. Now I am baiting their hooks, removing their fish, snapping tons of photos, and just having a great time fishing and exploring the outdoors with these gals! Yesterday we spent about an hour hiking down to the pond, drilling and scooping out numerous holes just for… Continue

Could those of you lucky enough to catch fish, photograph them, and put online here, please identify what they are for those of us still ignorant? I'm still trying to guess the different types of BG, and am usually wrong the few times they are identified.

http://www.lake-link.com/ If your from the mid-west you need to check out this site

The ice was 3ish inches. Caught in 12 ft. of water off the bottom on a size 12 pink jig and a wax worm. Temp at the time was low teens. Been below zero the past few nights but because we got so much snow on the ice last wed. the freeze up is going slow. Be careful out there!!

Waiting for the Ice

Cant wait for the ice to come.Got a flasher for fishing this year and am hoping for a couple of inches to walk on this weekend.This is an annual rite of passage for many of us up in the north (although I just took it up last year at 36) But not everyone that fishes up here thinks its that great ,I can honestly say, I didnt either, til, I pulled that first 8" gill up the hole.

When your on the outside looking in, I guess, it seems kind of dumb to sit in front of a bunch of different… Continue