Bow To Your Gills

Yes i have said it Bow to Your Gills. What is this all about? The gills of winter can be finicky and all be it jsut hard for many to catch. With many new ice rods on the market the lite bite is now easier detected. There are now new spring bobbers that are ultra sensitive, there are ones that are fixed to your rod and even ones that are adjustable that help you fine tune your presentation. These may help detect the bites, but it is at a loss to many to seal the deal with a successful hookup.… Continue

Never heard of anyone retiring from the South to the North? Well, I did it, but don't tell anyone, because it is a high crime and a sure sign of insanity. They're still looking for me, and it won't be long now.... I retired from the University of West Florida and moved to Kalamazoo to join my wife in her news and book store. My one compensation is that we are amply supplied with big bluegills! My best was almost 11", caught just down the road in one of the ponds we keep secret and where we hide… Continue

The water, calm, clear and blue
Mesmerizes me as I search for you.
A gently laid fly, only to lure
A beautiful vibration will be the cure.
I grip the rod when I feel it jerk
Swiftly I pull, as I watch my hand work.
As my prize begins to surface and grow
I feel all tingly, my face aglow.
At last I’m able to pull it in
A big beautiful bluegill is my win.

Lord of the Fly , Rods You Da Man!

Yer Lordship, The Boogieman Special Handmade LOFR Porcupine Quill has been christened. I caught about 50 with it doing the tattling. You're my hero!!!!!! 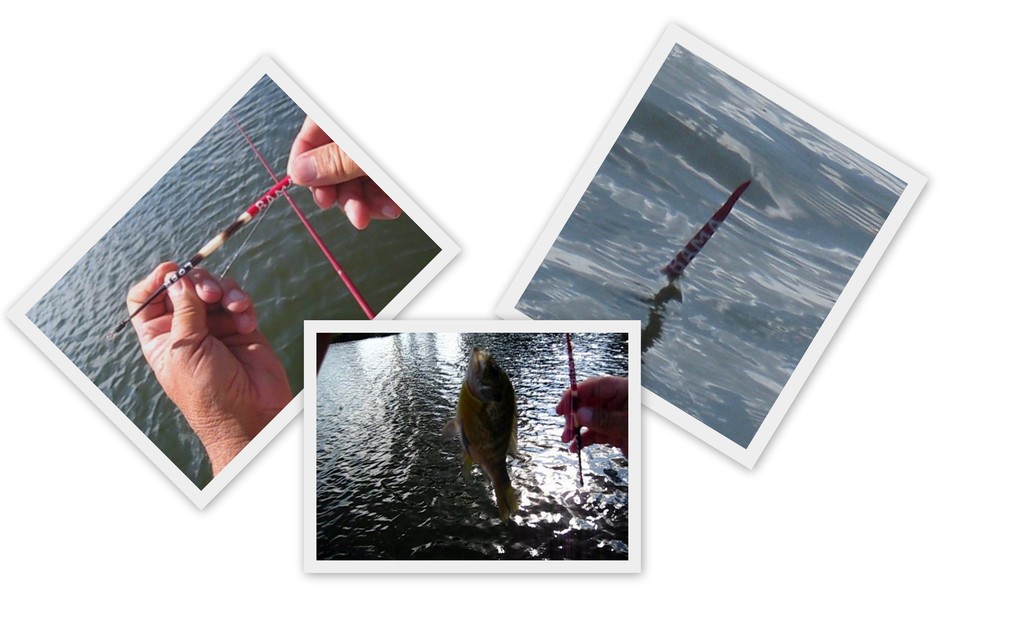 I live in Slidell, La. recently I visited a frend who lives in a suddivision that has a man made lake, Lake Bullard. Prior to Hurricane Katrina the lake had been stock with bass and blue gill. I had been hearing tales of a tropical looking fish that was now showing up. I fished the lake and caught about 50 fish some weighting as much as 3/4 quartes of a pound the lake is loaded. I was told later they were Texas Blue perch. My question is where did they come from no one I spoke to seems to know… Continue

Hey BGBM - when do we start the bluegill Christmas carols?

NOT TRYING TO MAKE ANYBODY JEALOUS, BUT LOOK WHAT I GOT!!! 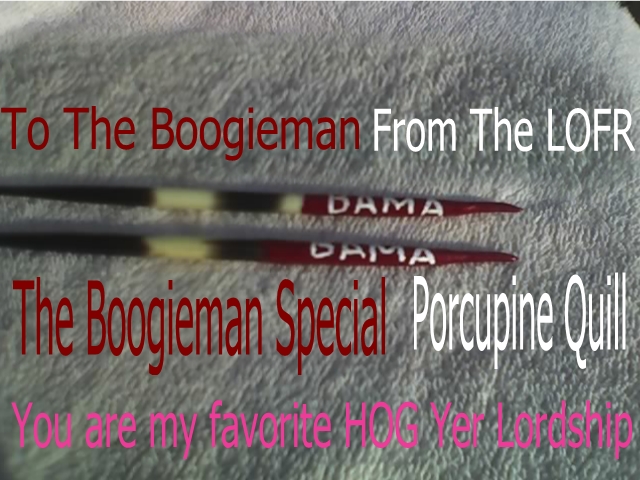 Well that was Fun!

I took a ride to Tarrant today and got to see the real thing and talked to Mr. Bud Richardson! I've got new pictures too. It is a really cool story. I'm going to let Bruce help me with this one when I get all the info together. I don't have as much time as I used to or patience for writing. There are two possibilities for getting Scott Hudson, Chuck and I into the lakes. I'm working on it. Even if it takes until next spring, I'm determined.

Checkout the new pictures! I hate…

Rain or shine snow or sleet (yea right not with the wife she hates the cold) we’ll fish for gills and cats like good little fishermen and women.

Well it stared as overcast and no wind so off we went to the twin coves to search for gills and cats.…

Imagine my surprise to open my email this morning and see a friend request from Scott Hudson, son of T.S. Hudson. I can tell the two of us have created quite the stir on the Big Blue Gill page. I never thought we'd find out about Mr. Hudson's fish! I'm excited and thrilled as all of you are. Maybe between Scott and I we can piece together where some of the fiction starts and the facts end.

And thank you all for your comments and encouragement. I just wish I had time to get out…

Well this day trip started out spooky with fog due to air temperature low 50’s and lake temp of the 70’s. The fog rolled across the bar from the lake pushed by a light breeze maybe 2 mph.

For those of you who are new members and don't know about it, there is a chat room if you put your curser on Forums, don't click it, and then just drop down to chat when it appears and click that. You can chat with anyone on BBG. Sometimes, though, they don't know about it either, or don't like to chat.

Had a picture problem and am in the process to repair it. Just a folder switch nothing drastic lol. 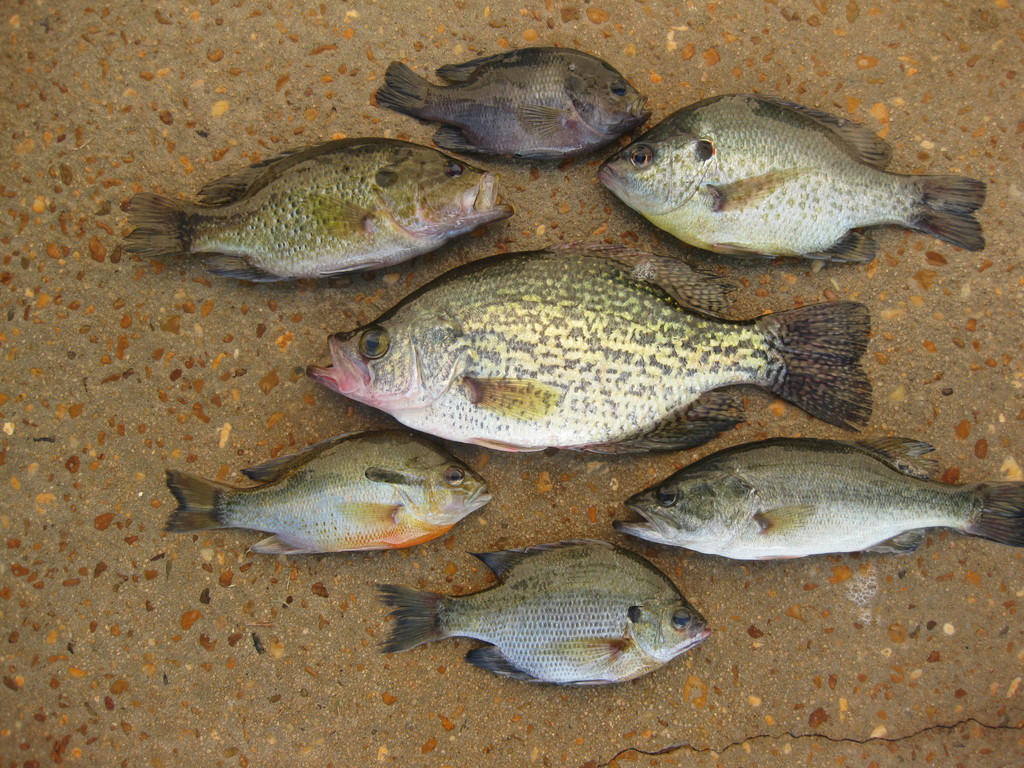 My son called me from his hometown of Macon, Ga. on Monday and said that he would be in Columbus,Ga. (my hometown 1 1/2 hrs. away), on Tuesday to take me fishing. My heart was in my throat when he told me this. We drove up to my friend's lake and could only fish for 1/2 hour. (Didn't realize how weak I was). Ended up catching 3 nice gills in the 9" range before I had to pack it in. It was a gratifying and heartwarming experience believe me. Sure added color to my cheeks and more hope in my… Continue

Had boat ready for lake and fly fishing for the big ones. Twenty MPH winds and rain. May still go around 11:00.

Everybody have a great weekend!

I'm sure you all know that the type of bobber or color of fly will greatly influence the number of fish you catch. I have outfished my buddy many times and occasionally he does the same to me. I first noticed this when the "Wing It" bobbers appeared on the market. I couldn't buy a gill. He was killing them with the "Wing It". The drag resistance on the "Wing It", is so much lower than most. It does seem to have some trouble in the wind. Sometimes If there is a nick on the line, it will not…