Today was a good day

Today I was out at the local pond doing some fly fishing, when I saw the Osprey that hangs out in the area came to join me. It was truly an amazing sight watching it glide over pond searching for it's prey. As I was watching it I started noticing fish boiling up whenever the Osprey's shadow passed over em. It was amazing to see these fish running, especially because alot of em were in spots I never would have guessed held fish at all! Eventually the Osprey caught a fish of it's own and left…

www.bigbluegill.com was founded by Bruce Condello and Aaron Matos during the March Madness tournament of 2008.  On March 20, 2008, Bruce was watching an NCAA tournament basketball game from his home, and was talking by text to Aaron, when Aaron suggested a website dedicated to raising and catching bluegill.  Aaron did the work of identifying available domain names, and Bruce made the final decision to go with…

I would like to congratulate and thank Jim Gronaw for sharing his recent Carp fishing exploits with the members of Bigbluegill.com. It's a bluegill site and that's what really makes us go but it has been nice during the Winter doldrums to hear and see about some of the other options available right under our noses....Jim would tell us he's no expert but he has…

Bluegills, Lepomis macrochirus, are the most abundant and most important fish in northern Indiana natural lakes. Based on standardized data compiled by the Division of Fish and Wildlife at 197 lakes since the 1980s, bluegills averaged 45% of the number and 15% of the weight of fish collected in 387 fish population surveys. Electrofishing catch rates in June from 219 surveys at 125 lakes averaged 86/15-minutes of sampling…

Do you have a favorite weed

I have a personal best as far as weeds are concerned. Curly Leaf Pond Weed is a fish magnet for me and I have a hard time passing a clump without fishing it. The lakes I fish in Michigan are loaded with them. You may see a single green stalk in 10' or 15' of water depending on water clarity or maybe a ¼ acre or more of them bunched together. They tend to grow deeper than a lot of lake weeds do…

Color Variations in Bluegill- Anyone else experience this with your Bluegill? 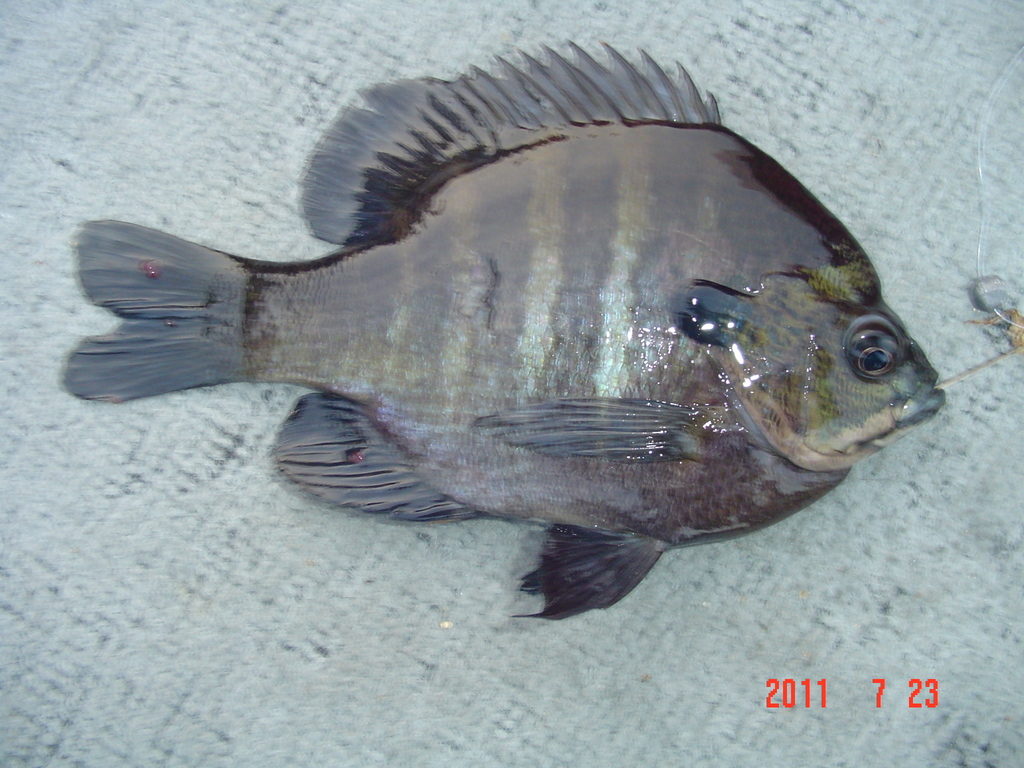 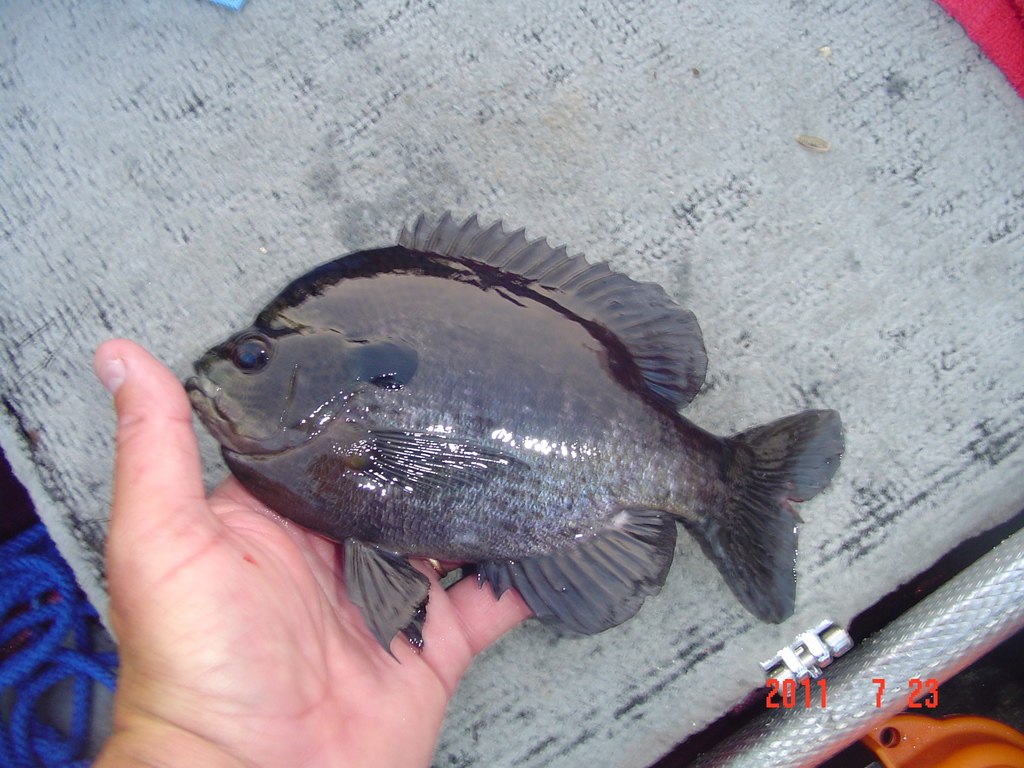 i use gulp baits in the glass jars but am having trouble with them leaking ,not much but enough that i had to put them in a plastic bag to keep from leaking all over my tackle bag . i tried making a small gasket out of a strrofoam plate with a little sucess , but some still leaked a little . anyone out there with similar problem and or a possible soultion

As you know, Texas has suffered from a serious drouth the last two years and my one acre pond was down about five feet. Fortunately, we got over three inches of rain a couple of weeks ago and now the pond is up a couple of feet but very muddy from the runoff. I have waited, hoping it would clear on its own. It has affected the BG feeding......they have quit feeding on surface pellets. Would appreciate your advice on how long it might take the pond to clear, (it's been two weeks) and if I…

A starling picked up a rooster tale I tied on to try out a new rod in the back yard.  Two seagulls ate my minnow, A mallard and  a black duck got hooked when they swam by unattended popping bugs took two times to learn my lesson.  A low flying pelican got tangled in the line from my surf rod and became an attack pelican while I cut it free.  Two baby alligators ate my  minnows (their mama was highly upset… If you're a bluegill, that is. I love coming across little bitty  "one-liners" either in articles or research papers that either stand out as being profound, or explain via scientific documentation something generally perceived or accepted in the (bass) fishing world. Kind of like one of those "A-HA" moments. I don't find many of them, but I've come across a pair of studies…

Looking around in the barn and found that fly rod that I didn't know I had. I was going to go to Bass pro and get a new fly rod so that I could learn how to use one. Lucky for me I went to the pole barn first. I don't know a thing about it but hope it will be good for gills and sunfish. It's a Gander Mountain Guide Series. I tried to look it up and found no info so i'm thinking it must be discontinued. Its a Gander Mountain Guide Series- Plateau PL9044 9' line wt 4. If anyone can tell me if…

HAD GREAT SUCCESS THIS SEASON USING THE BERKLEY GULP ALIVE 1'' IN THE SMELT COLOR. KILLER FOR CRAPPIE AND BLUEGILL. OCCASIONALLY  BASS. ALSO I'M USING AN 8' FLOAT AND FLY ROD BY BASS PRO AND PFLUEGER TRION ULTRALITE REEL. CAN BE USED FOR FLIES AND ARTIFICIALS AS WELL. LOTS OF ACTION.

So I was all excited today as a set of new floats came in from Louisiana, of course they were vintage floats on wrapped onto even older winders. A winder is just what it sounds like, you wind your rig up on it and these babies are sweet. I can see in this fishing tackle something that is around 75 years old, yet it is more advanced than what we have today.
Tackle from Louisiana is easily…

Here's a massive bluegill caught on Bill "Musky" Modica's spooning method.  This method has been heavily featured lately by In-Fisherman Magazine, both in print and on their nationally acclaimed fishing show.

This fish was over a foot long, and looked like it was taking steriods.  I'd love for Bill to describe this particular spoon and why he likes it so much.  Bill recommended I use this setup, and it worked like a charm.…

Per chatroom discussion request, I'm posting the more indepth discussion here. Expert and personal knowledge opinions are truly welcome. Correct me if any info is incorrect in anyway:

Here's one of the myriad articles I've studied about back in college between 1994 to 2001, while double focused on bio-medical and environment toxicology fields of study. Information was found in late 1995, but was not published and harvest until nearly a decade later. I've followed the information…

Hey Greg, It's one of my hand poured one inch curltail grub bodies that I pinched the tail off of. I then threaded the legs through the body with a sewing needle.  The legs are spinner bait skirt material.  If you want to make your own, buy a package of curl tails and some skirt material and experiment with it.  To complete the rig, run a 1/32 ounce jig head through and clip on a 1" diameter foam, weighted tear shaped or round bobber a foot or so above your terminal tackle. If you don't get…