The three best knots for Catfishing.

I'm going to show the three main knots I use when targetting Catfish.  These all have their uses.  I'll also explain where I use these knots.

I use these in the following situations.  The Clinch knot can be used to tie line to any kind of a looped attachment point.  Dipsy sinkers, swivels, straight-eye hooks, etc.  However, I typically only use this knot to tie line to a swivel.  The Palomar knot is a great, strong, easy-to-tie knot that works in the same situations as the Clink knot.  Swivels, straight-eyed hooks, Dipsy sinkers, and even bank sinkers (I use this knot all the time for bank sinkers).  Snell knots are the *BEST* knot for tying line to hooks that have an up-turned eye.  The reason for this is that the direction of pull is inline from the hook shank to the line.  This is critical when using circle hooks.

I do have one disclaimer.  I could not find a video that shows how I actually tie a snell knot.  I've provided a link to an easy-to-tie version, but I have not personally used that knot in my own fishing.  If any of you tie flies or jigs, the way I tie a snell is basically the same thing as doing a whip-finish by hand, if that makes any sense.  I may have to try to do a video and post that. 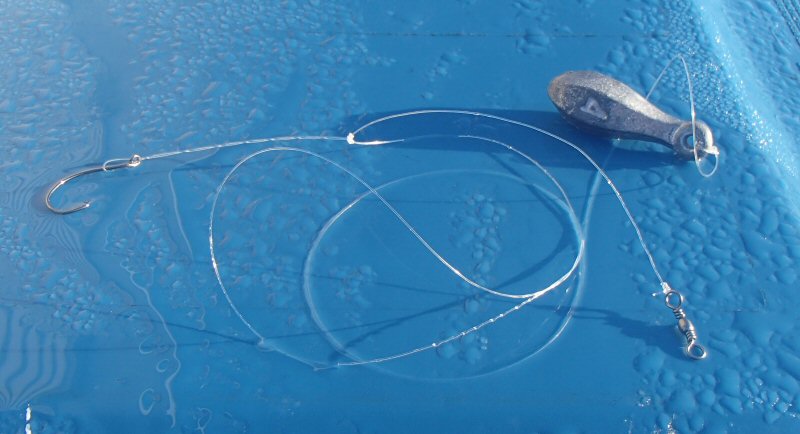 The Kentucky Rig.  Tied with 20 lbs test Big Game.  Swivel on one end, tied with a Clinch Knot.  Twisted Dropper Loop a few inches away.  The hook is attached via a loop-to-loop method between the hook eye and the dropper loop.  This works well with an upturned eye.  I wouldn't recommend a straight-eye hook for this, the direction of pull isn't straight and you won't get good hookups.  Bottom end has a 4 oz bank sinker tied with a Palomar knot.  I find that easier to do than a Clinch knot, but a Surgeon's Loop and doing a loop-to-loop connection will work as well.

WOW a 4 oz Sinker .I use 3/8 oz LOL but I can see for Blues in Big Rivers like fishing High Tide in an inlet for Fluke ,the need for bigger weights.It's just so different from what I'

m doing now for Channel Cats and Bullheads.I am all ears here though Allen and thanks!

Of course, sometimes you don't want the bait to stay in one spot.  I typically threw a Kentucky rig with a 5-oz weight, on my 12' surf rod.  40 lbs test braid and leader.  No shock leader, although with a 40 lbs test leader and a 5-oz weight, you don't really need a shock leader.  I would fish this rig below Keystone Dam, OK, in the turbine outlet when they were generating with 12,200 cfs.  This looks like a boiling cauldron of Hell.  The goal was to throw the rig up against a concrete wall, where there is just a little bit of slack water.  Once it splashed down, flip the bail closed and start reeling slowly.  You'll feel it hit bottom, and start to slide across the bottom from the force of the current.  You didn't want to let the line come out of the outflow before you start reeling like a madman, or you'd hang up on a rock pile right at the mouth.  You were feeling for the THUMP!  of a cat hitting your bait.  With a circle hook, it's pretty much an instant hookup.  Due to the size of the area I was fishing, and the force of the current, I'd get maybe 60 - 120 seconds in the strike zone.

You have to hit an area maybe 3' wide and a hundred feet long.  You want to hit that zone as far away as you can, to give your bait more time in the strike zone.  Cats are holding in that zone, waiting for stunned and mortally-wounded bait to come through the turbines.  Make that cast, over and over and over again, until either your arms give out, or you catch what you want/need.

I caught a 24 lbs Blue doing that.  Hung into at least one, probably two, large Spoonbill Paddlefish as well.  Striped Bass would be INSIDE the roiling waters.  A live Bluegill on a large circle hook, either tossed out with minimal weight, or a large float, would get Stripers in that roiling mess.

Sounds much more exciting then my exploits .LOL!

Just as a head's up, I managed to accidentally click the link to "stop following this thread".  If anyone asks me a question, and I don't answer within a couple days, you might want to send me a PM through BBG, or contact me on Facebook.

Well, I guess since I have multiple responses in this thread, I'm still getting notifications :)

"Those channel cats are good eating."
51 minutes ago

"Thanks Jeff been too long .This day is what we needed!"
13 hours ago

We’ve had multiple cold fronts back to back…..and accompanying rainfall which has pushed our…
18 hours ago
2 Comments

"Thanks Bruce and John, we enjoyed a very comfortable morning with a good bite…..I might have…"
yesterday