THOUGHT IF THERE WERE THIS MANY BASS, THEY WOULD KEEP THE DINKY BLUEGILLS IN CHECK. MAYBE, FISHED MORE THAN  I THINK. PUMPKINSEEDS ARE BIGGER THAN GILLS. CAUGHT A FAT 11" BULLHEAD. STILL HAVE A LOT OF GREAT SPOTS TO CHECK OUT. LONG STRETCHES OF  LILLYPADS. DO GILLS LIKE LILLYPADS IN THE SUMMER? LAKE IS VERY WEEDY, WITH SOME SHALLOW HUMPS IN THE MIDDLE. GREAT LAKE TO WADE AS THERE IS A POINT IN THE MIDDLE WERE IT IS SHALLOW ENOUGH TO ACROSS, SO I CAN FISH PARALLEL TO 1 BANKS AND BOTH SIDES OF…

1/2 WALK WAS WORTH IT TO FISH NEW SPOT IN THE MARSH! SHOULD I HAVE RELEASED THE DOGFISH?

READ ABOUT LAKE ON A BROCHURE POSTED AT ANOTHER LAKE. MARSH IS A LITTLE DANGEROUS SUNK IN THE MUCK ONE LEG UP TO MY THIGH. 6 OF 8 GILLS 6-1/2" TO 7-1/2 ONLY 2 DINKS. CAUGHT ON BERKLEY POWERBAIT MAGGOTS AS I WAS RETREIVING. CAUGHT CRAPPIE ON BERKLEY POWERBAIT MINNOWS. WASN'T SETTING THE HOOK HARD ENOUGH ON THE 3". HAD A BIG FISH SPIT IT MULTIPLE TIMES. THINK IT WAS A BASS, BUT IT MIGHT HAVE BEEN A BOWFIN. WILL HAVE TO TAKE A PICTURE OF MONSTER FROGS. WERE BIGGER THAN ANY GILLS I CAUGHT.… 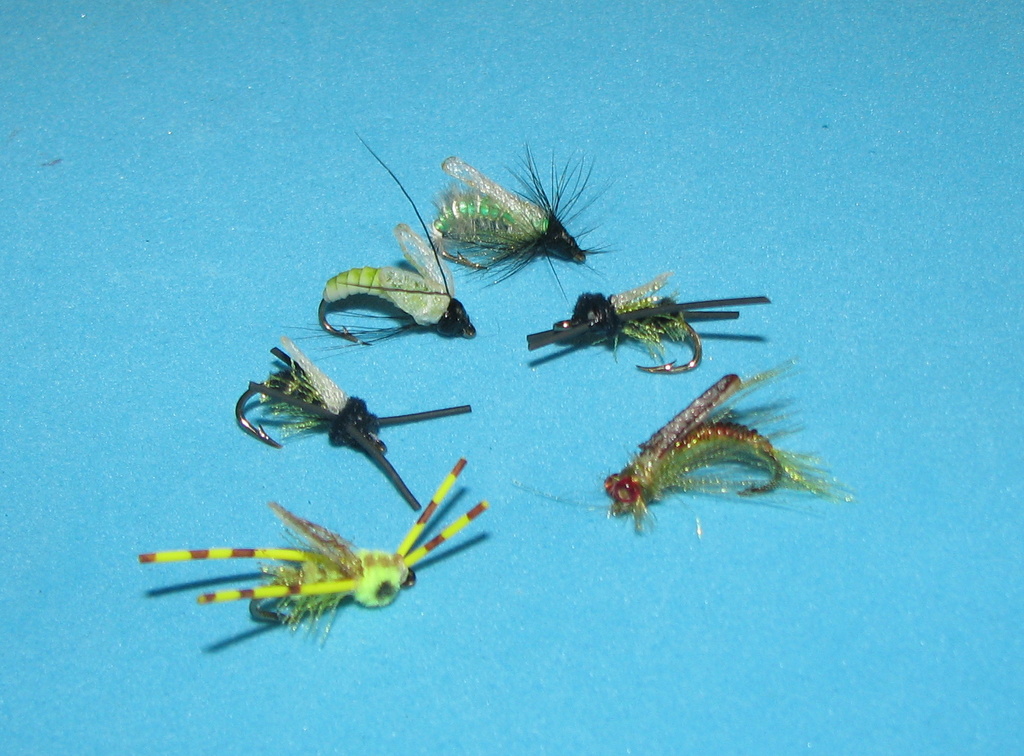 Wanted to share some material I have found that I have adapted for fly tying.  It can be found where sewing goods are sold.  It's called stitch witchery.…

Through the years I have learned that a lot of items labeled "for fly fishing" often cost more than other fishing tackle.  The same is true with" fly tying" material.  But thanks to the abundance of craft store now a days I have managed to support my habit of fly fishing and fly tying by finding comparable substitutes.  I realize there is no substitute for top grade hackle and proper tying thread, but often times synthetic material, beads, foam, glues, and others materials adaptable for fly…

Ok i posted about this spot i call the honey hole. Its a little spot i found that is full of the biggest bluegill ever and no matter what time of day or when i go i alway catch atleast 10 to 20 big huge one but it always on live bait mostly crickets!!! i wanna jig in that same area but i cant get a bite on no fake bait.im fishing from the bank. any tips? Saturday evening headed out directly after work to my favorite bluegill hole, armed with various colors of the Greasy Monkey fly. Since I'd been catching fish of late on my little brown bug, I decided to tie on a brown Greasy Monkey with a copper stripe down the side.  This was my prize.…

I am new to this site, and glad I found it.

I was wondering if anyone had some guidelines for making a good cane pole?

Usually I use an ultralight spinning outfit, but it's been so weedy, when I'm hoping for a fish supper I'd like to just haul the little guys right out of the water!

Heck of a fish story

I cast out a small mini-mite attempting to catch some bluegill and perch. On the first cast a 6" perch grabs it. As I was bringing him in something just started taking drag like crazy. I kid you not a 20+ pound channel cat goes to the surface and spits the perch out. But the fun wasn't finished. Within seconds two more bass are looking at the perch. One nice one eats it and I pull back hard to let my dad throw the plastic worm to them but I had hooked the stupid green carp. So after going… I really enjoyed the story....Many of you may have already read it.....Pretty cool that a little…

CRAPPIES ARE TOUGH WERE I FISH. NOTICE THE DAMAGE TO THE MOUTH OF THE 7-1/2" BLUEGILL. CATCH & RELEASE WORKS! UNFORTUNATELY, ONLY THE CRAPPIE WAS HEALTHY ENOUGH TO RELEASE. CRAPPIE WAS 7" BLUEGILL & SUNFISH 7-1/2" ROCKBASS 8". NOT BAD FOR SHORE FISHING IN MICHIGAN.… And see how the size 8 BH Wooly Buggers that I tied up last night work.

After a little while, I realized…

I had tied up a deer-hair bass popper that I wanted to try out, so off to the pond at work I went this afternoon.  The popper works, although nothing decided to sample it.

I was seeing a few surface hits here and there, so I decided to put on a foam hopper and see if any of the sunnies were hungry.  I didn’t get any hits on top, so I tied a dropper onto the hopper and dangled a BH Wooly Bugger below the hopper.

I got a few hits, but didn’t connect with…

On Tying "New to me flies", and aggressive sunfish!

Yesterday, I was tying up a storm, since it was my day off.  Several different GFA Hopper patterns, to round out the basic color variety that we get here in OK.  Green, yellow w/ green, yellow w/ brown, and brown.  I might tie up some yellow w/ white, as my son Logan caught a yellow hopper with white wings this morning when we were fishing.

I also tied up some Gurgle-Pops in different colors, and a couple in size 6, intended for some LMB's.  I took a stab at tying a size 12…

What is the reason??

I watch a number of you tube videos featuring some of our members catching big gills and crackers.  My question is why do you release them?  Is it simply that your freezers are full, or is there a state regulation on length limits?  I know that in some private compounds such as Richmond Mills that you folks catch and release because you want the population to grow.  If that is the case, doesn't the lake get to the point where you need to take a few out?  Please understand that I'm not…

Caught a small break in the heat on the 4th, so I went to my friend's lake to test out some new colors of the 1" jig that I hand inject.  It wasn't anymore than the second cast when I hit pay dirt catching a 3/4 pound gill.  On the following cast, I hit another gill about the same weight.  That new smoke/silver glitter did the trick.  I was on the lake about 8:00 AM and was off at noon with 18 nice gills and redears to my credit.  Sure felt great watching that 6' ultralite bend.  Hope ya'll…