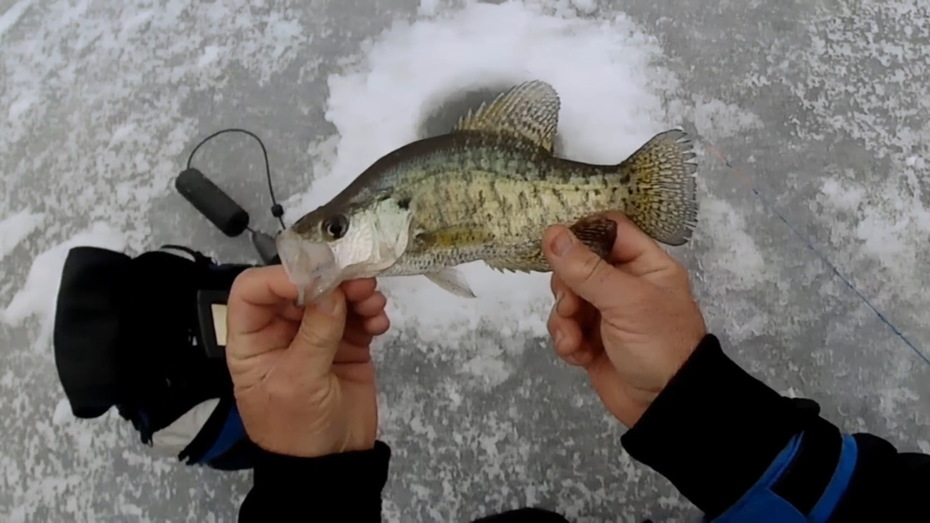 I noticed that about this series.  Some had small guides, others had bigger guides.  I wonder if the blanks are available, so folks could tie up a custom rod with eyes/guides and handles of their choice.

...i have a negative issue with this rod... it is the only rod in the bundle that has small guides... ices closed in freezing conditions... I have no problems with air temps in the 30's or even the upper 20's... but when it locks up the ice damages Nano and Gliss... totally strangleholds mono... so I've been running 3 combinations of reel and line depending on the forecast.  when upper 20 or below temps will be forecasted I use the reel loaded with ice braid, powers right thru the iced tip.

Gliss is turning out to be my favorite ice fishing line. so I like to use it when I can

...yep mine is 36" with the orange tip... since it is glass I thought I would lose some sensitivity... I am running 4# Nano thru it no-stretch so sensitivity seems fine... I believe I am hitting all the bites because I validate with the sonar.... i agree the orange tip is nice... very nice visibility.

Hit the Full Screen button when watching the video.  Use the space bar to pause and restart playback.

Thanks for the comments, Slip.  I just bought one of the Ice Blue rods, a 24" Super Light power, fast-action stick.  Put one a spinning reel that I already had on it.  Cost me $9.99 at a local outfitter.  Mine has some orange wrapping at the tip.  Basically, I don't need a spring bobber with this setup.  I've seen the same rod, with a reel, at both Blaine's and Meijer.  One of the Meijer stores here in town even has a 36" Ice Blue rig with a reel, but not the orange wrap.

I was spudding my way out each time I've checked the ice.  I didn't venture out into water any deeper than knee-deep, and I had my water-proof, knee-high boots on, just in case I went through.  Once I realized how thin the ice was, I cleared off.  I think I was maybe 50' from the shoreline at the most (most of the lakes here have a VERY gradual slope from the shoreline to the first break).

Some folks I know around here are getting out on a couple local lakes, on 2.5 - 3" of ice.  They will admit to being a little crazy, but are very careful about it.  Personally, I don't want to risk it unless I have at least 4".  Maybe Monday, after the deep-freeze opens up, provided the snow we are expecting doesn't insulate the lakes.

Push comes to shove, I might have to drive north a bit.  Or, I just might play it safe and stay home.  I got some 4mm tungsten jigs in last week, and some new AlumiGlow powder paint in Glow White.  Need to play around with that and try to get some WonderGlow pattern jigs done.

Marvin... you are absolutely right about the text... try viewing in youtube by hitting the lower right-hand button then full screen...control pause and play with the left mouse button if you need to pause the text.

Thanks Allen honestly ... I would not step on any ice thinner than 4" for the simple fact it could vary by an inch or two throughout the lake.

yep the waxies have outshown live bait on most outings... my left over spikes are back in the refrigerator... LOL

Thanks Jeff!... I looked at the Solunar numbers and I did not like… but I said what the hey… produce a vlog showing the stinginess of the bite at the low of the low...

Just watched the video, Slip.  I have a few questions.

3)  I'm pretty sure you're using those pink Gulp! Waxies that you're fond of.  If you don't mind me asking, what color scheme is the jig you're using?