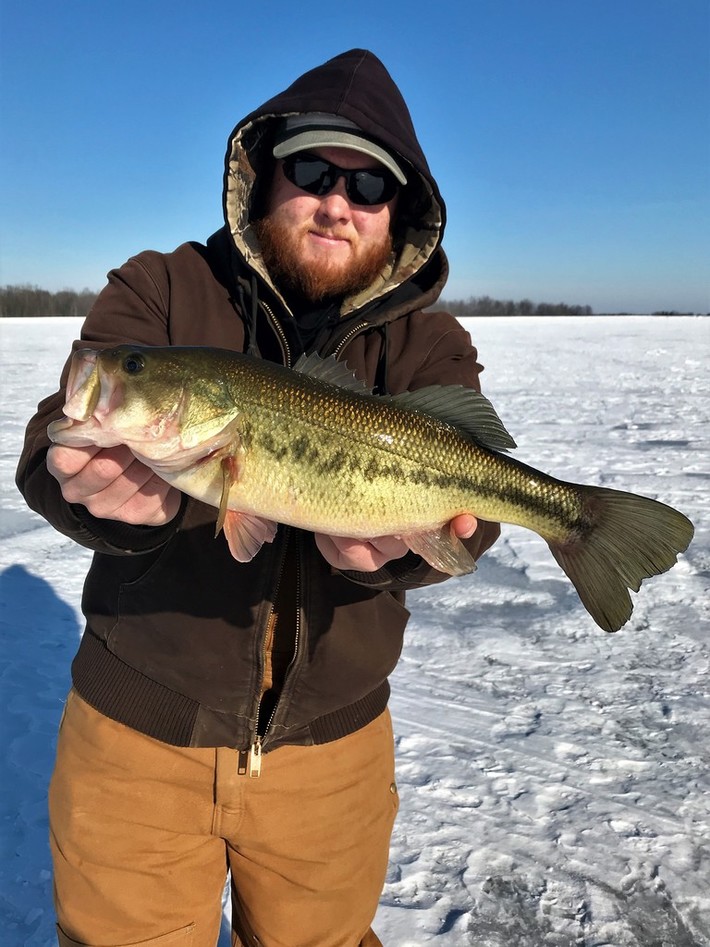 My best bass through the ice hit on the same small dropper rig tipped with a waxy that the panfish were biting on. A pretty fun fight bringing the fish up.

I believe that theory also works also with big bluegills John… I used to casually move away from the spots I was tagging many tiny, small b.gills thinking spots were to be typical only with that size. I caught a couple trophy gills last season simply just by waiting out the “small” bite tagging dozens of them before finally tagging a big one in the midst. I firmly believe now big ones mix in with the small also.

Fish are curious creatures schools of fish may at times signal to all sizes that feeding is the purpose of the school.

Ive seen it on ice fishing video footage where Big preds will slowly mix in with small panfish and there would be no panic in the school… accidentally tagging the LMB on small panfish jigs with the resulting battle from the LMB would scatter the rest of the fish in the spot… any other large fish would pose interest in the battle sometimes following the tagged fish during the battle. After time the spot usually then settles back to normal.

So do prey fish feel comfortable swimming with the preds until active feeding periods… I think they do I have a feeling during periods of Lull Solunar activity fish sizes mix as well as preds and prey until the active Minor and Major periods kick in then the frenzy starts and there is more feeding size separation. just a theory of mine…similar to yours

Having a under water video cam sure does bring some validity to a lot of theories. Someday id like to have a vid cam of my own out on the ice as a regular component of my arsenal. Sure would help.

Thanks Mike the reason I ask is after catching close to 30 dink perch out of a few holes close together a nice White Catfish showed up .I am workin on the theory that if you are catching lots of fish in an area even if they are dinks , a big one is bound to come along to investigate the activity . Calling them in with dinks !

It was a pretty slow and inconsistent bite throughout the day, John. I got a couple gills from that hole in the morning a good while before this bass hit. After this fish, that hole went completely cold until I tried it again late in the afternoon when I wound up tagging a few more gills, including the hen in the pic I posted. It's tough telling if the bass had anything to do with the slowdown or not; the action got really slow through midday for all the holes we drilled. My dad did happen to tag a largemouth of his own (about a 12" fish) right in the mix of getting a few gills from another hole at dusk, though.

I am curious Adam .How many panfish would you say you caught in that hole or neighboring holes before MR.Largie showed up ? I'd say me and my nephew got 30 perch before the Catfish started showing up .We stuck to the holes instead of going to find other larger fish because we thought it only a matter of time before the bigger guys got to us with all that activity.

…nice tag on that LMB with ice tackle!

Slip Sinker commented on Mark Sleeper's status
"...cheepest way to resize is Microsoft Paint ... free with windows... a picture doesnt have to be…"
16 hours ago