BBG database of tied flys and jigs…if you are a creator or a user of a member created tied fly or jig post your creation, review or comments on the pattern here. Start a discussion for every tie mentioned. This is a great way of organizing all these great creations of ties in one location. Give tips on fishing and post pictures of your successes with the pattern.

Below are 3 foam bluegill/crappie, perch, etc. bugs I tied recently. I used Kreink Braid for the under-body to add a little flash, and also for a tail. There is no end to uses for the Kreink Braid. I…Continue

One thing ive noticed about favorite or popular B.Gill baits is the B.Gill's fascination for rubber legs… one of my most favorite ties growing up as a kid was the foam spider with those rubber legs.…Continue

You need to be a member of BBG DATABASE OF TIED FLYS AND JIGS to add comments!

How about this one, Bruce?

HEY;; THANKS BRUCE; LOOKING FORWARD TO SEEING YOUR TIES BUDDY !

When I click on it it says the page doesn't exist.

Nice read, McScruff. I enjoyed it. For some reason the second link won't open for me.

Over the past 50 years I've spent a considerable amount of my fishing time each spring chasing bluegills. In the beginning I used my spinning gear, rarely ever my fly rod. My bait of choice in those early years was a small chunk of nightcrawler. I used a bobber and thoroughly enjoyed fishing for bream.

I also learned to fish both crappie and bluegill with smaller minnows. Crappie are fine in the skillet, but not nearly as much fun to catch as bream.

Then in the mid-60s' a friend introduced me to float tubing for trout. It didn't take me long to adapt tubing techniques for my bluegill fishing.

At first, I spent most of my time fishing sinking lines and wet flies. About that time I had the good fortune to fish with several of the top float tubers in southern Idaho. I learned bluegill fishing from several of these anglers, including the legendary Ruel Stayner. Ruel taught me to use small bluegill poppers and fish next to the weed beds and tules. Ruel explained to me that the bluegill's lifestyle is more in tune with trout than any of the other warm water fish.

"Bluegill," Ruel explained, "feed on basically the same aquatic insects as any of the members of the trout family." He explained that the best wet flies to use for bream include imitations of:
- leeches,
- damsel nymphs,
-dragonfly nymphs,
- backswimmers,
- mayfly nymphs
- caddis pupas.
He also mentioned that when fishing for larger bluegill, his namesake pattern, the "Stayner Ducktail," is by far his most productive fly.

But Ruel also spent much of his time fishing floating lines and some type of floating fly pattern. While he liked small poppers, Ruel would also fish traditional dry patterns like the Royal Wulff and the Humpy.

While I stayed pretty much with small poppers for a couple of seasons, I picked up some floating ant bodies, and tried tying some "spiders." I had a little trouble with the rubber legs, so one evening at my vise I had a brilliant idea. I tied on a white ant body and dressed it with white saddle hackle. I thought it looked great. A whole bunch of fish (about 50 or 60 according to my journals) agreed with me on my next bream trip.

During the following months, I dressed the same pattern in black, orange, green, yellow and brown. When I began to tie flies commercially, my Taylor, "Bluegill Spider" became one of my most successful patterns. When I operated a Boise fly fishing shop in the early 80s', I spent many a lunch hour tying spiders at my desk while customers waited patiently to go fishing.

To this day, I still see no reason to "waste" fragile floating dry flies on bluegill, when the spider works so well. It is extremely durable, and when the hackle wears out, a new one can be wound on in less than a minute. I have Taylor spiders in my bluegill box that have been repaired numerous times.

Hackle: Saddle hackle to match body color, four or five wraps. ~ Marv
(Sadly, Marv Taylor is now passed from this world. But his legacy lives on....)

Some of mine, super simple:
https://goo.gl/photos/vQXUTGKmpT4MmXM9

Cool ties, Carl. As soon as I get my photo shop back up and running I have a few to post.

SECOND PIX;; IS SOMETHING IVE THOUGHT ABOUT FOR AWHILE;; USING TROUT MAGNATE BODIES; ON REGULAR JIG HEADS; 1/32 OZ;;  ADDED THE  ( RACE STRIPES ON THE SIDES )  THEN; SOME KRYSTAL FLASH;; SOME HAVE PINK BRAID ALSO ON TOP ALONG WITH THE KRYSTAL FLASH

OK;; TRIED TO MAKE A COMMENT ON THESE NEW TIES I MADE;; TOP PHOTO; IS CURLY TAILS;; LAYERED SOME SILL LEG MATERIAL ALONG THE SIDE; ( RACE STRIPES I CALL THEM )  ALSO PUT SOME PINK BRAID ON TOP; THEN ONTO TOP OF THE PINK BRAID; ADDED SOME KRYSTAL FLASH; FOR EFFECT; PUT ONTO A SICKLE HOOK JIGHEAD; 1/32 OZ. 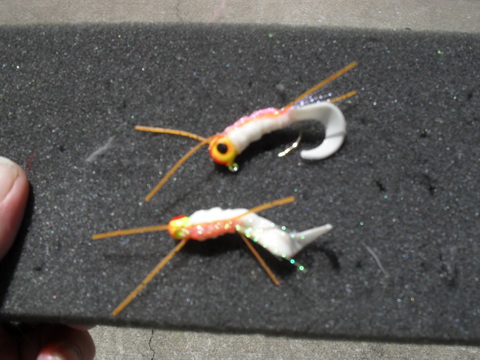 "Thanks John….I’m going to try to find some and give it a whirl…..catfish are…"
1 hour ago

"I use crawler pieces on the floating Jig'-heads for Perch and Bullheads. Work…"
4 hours ago