Where do the Bluegills go in moving water in the winter?

This has perplexed me all of my fishing "career".  I can catch bluegills in the local lakes and ponds up until they ice over in January or February, but in the moving waters of the rivers and canal, they disappear.  Usually around late October, when the water temp gets into the 50s and they don't show up again 'til the end of April, when the water temps are getting into the 60s.

I assume in the rivers that the 'gills seek out the deepest pools to hangout, out of the current.  I've seeked out these areas but can only catch yellow perch, pickerel and an occasional smallmouth.  The canal though, is essentially a uniform ditch, with constant depth and width, so there is really no slow current areas that would be preferential.  Again in the winter it is just yellow perch and pickerel.  (this disappearing act happens with all sunfishes - bluegills, red breasts, greens and pumpkinseeds)

So, in moving water, do they just stop eating?  Pack their bags and move to Florida?  What am I doing wrong? Do any of you experience this too?  BTW, I'm in central NJ.

Can't speak for the D&R but for rivers and streams I would suggest a fly and float technique. Blue gill are just down a bit deeper and usually are located in the slower water. Think trout fishing and look for eddies and breaks in slower moving water. Suggest 2 lb test, small trout magnet floats, micro shot, and #20 midges. Let the float flow into the eddies and breaks.  You will need to know the depth since you  present  the offering on or near the bottom.

Well, I finally got some late season bluegills from the canal!  Earlier in the week,  I had tried some of the small flies under a float, that was working well in the ponds, to no avail.  Drifted them through the deep slow water upstream a lock and along the deep slower current areas along the bank.

Yesterday,  I tried a different area, one that is more silted in and only in the 4-5' deep range whereas my normal area is 7-8' deep.  The current was also a bit faster than where I usually fish.  I was going for perch and crappie and was using a modified 1.5" crappie tube on a dropshot rig.  I don't know if it was the new location or weather (steady light rain) but I had one of my better days for this time of year.  Final tally of 7 bluegills, 8 crappie, 3 pickerel (1@23") , 4 yellow perch in the 13-14" range and a couple of dink largemouth.

The gills where aggressive,  hitting the hard like the pickerel and perch.

A cold front pushed through last night, so I guess I'll find out if it was the weather or location when I give it a try again today. 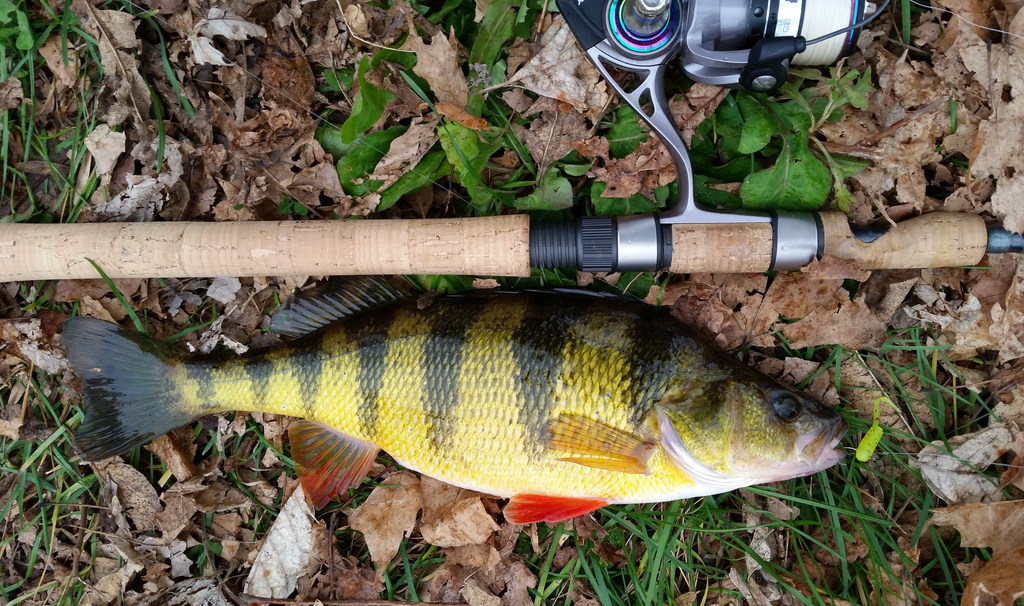 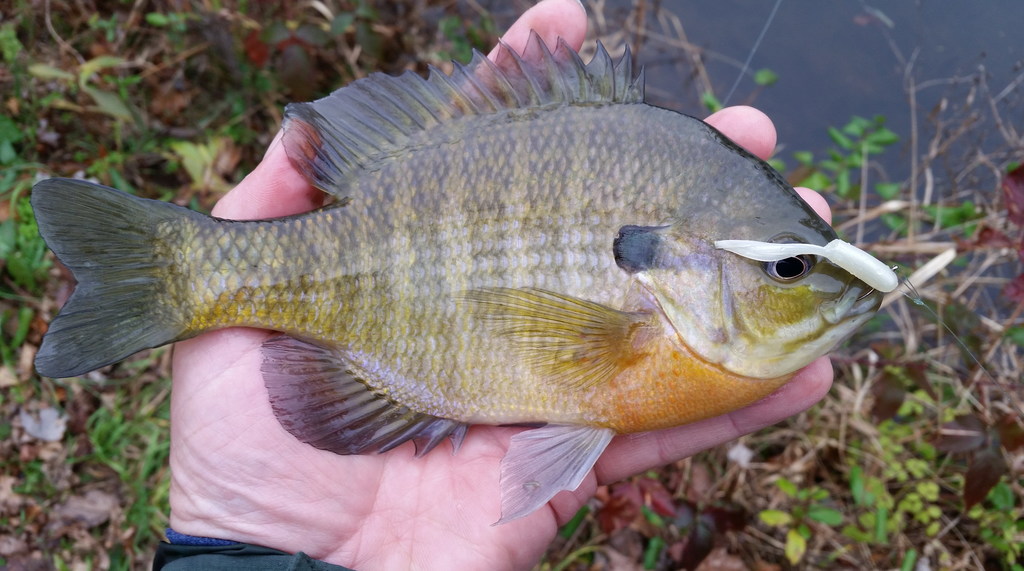 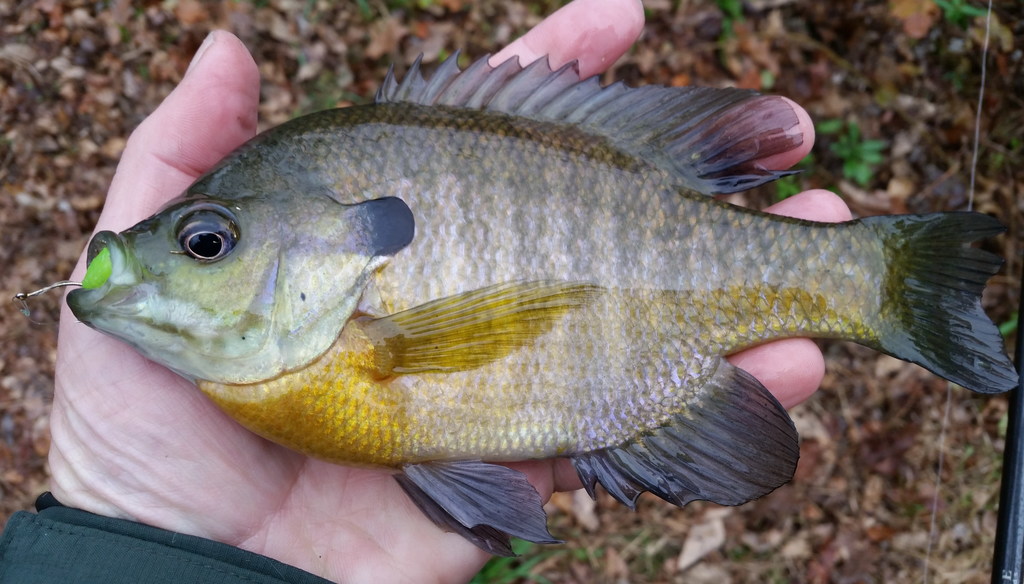 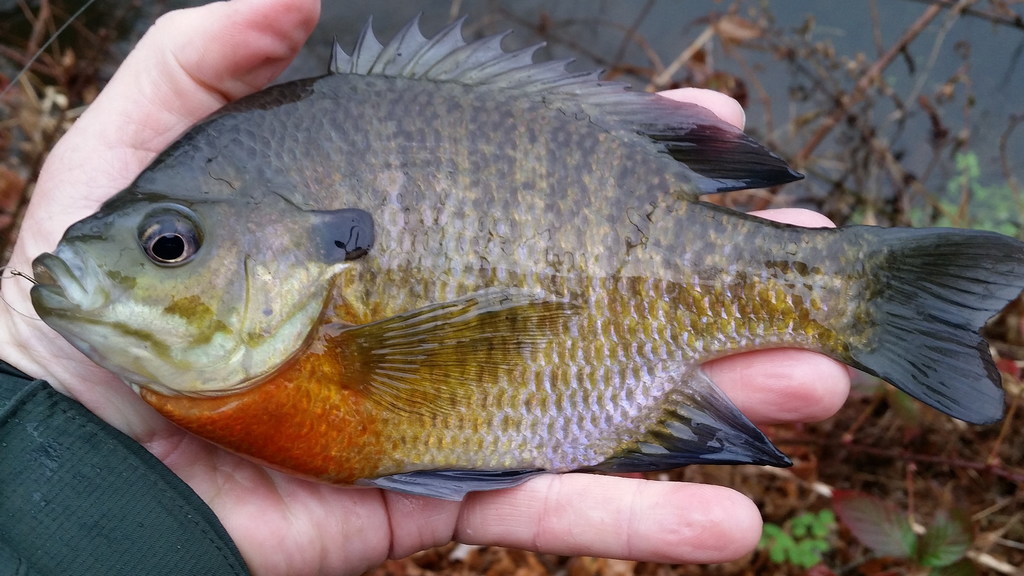 excellent catchs there !  warms up a cold day !

nice going steve!... looks like they were in the zone for you today! congrats

Thanks for the comments guys.

Despite last night's cold front moving through, they were still there today and eager to bite.  So, I guess it's location over weather.  Today's catch, for about 2 hours of fishing:  2 gills, 6 crappie, 3 perch and 3 pickerel (2@22").

Either the dropshot rig  is the way to go for pickerel or I'm extremely lucky.  5 picks in the past 2 days and not one bite-off.  Not even a nick in the 6# mono line.

Great day , good work! Is that drop shot a vertical presentation from a boat ?

I don't have a boat.  Casting from shore to the far side of the canal.  Sloooow retrieve with pauses and twitches.  I'm using about a 2 foot drop between the weight and the tube bait.

That's a good question Steve. I'm from northern Kentucky and I like to fish a local creek called Gunpowder creek. You can catch all the bgs you want up to about Halloween then all of a sudden the bite shuts down completely for all fish in this creek until about late March. I have no clue why this happens here either. This creek normally runs about 2 to 3 feet on average with a ocassional deeper hole. It's frustrating not sure what happens in these situations...

"Thanks Jeff! We were told by several sources up there that we did well under tough conditions,…"
5 hours ago

"Thanks John…..looking forward to get back out after this storm settles down…."
5 hours ago

"Lunker! This year is the first use of the Ned rig for me . Got some smallmouth and Rock Bass and a…"
5 hours ago

John Sheehan commented on John Sheehan's group Multi Panfish
"I have thought "Jack Perch " to be a Southern term for Jumbo Yellow Perch but this week,…"
yesterday

"That’s great news…..this gives you so much confidence when fishing…..enjoy Jim…"
yesterday

"Wonderful Jim……..that’s why we fish…..never know what the next cast has…"
yesterday

"Thanks John….that’s what I was thinking…."
yesterday