The Fish Activity Time for the late afternoon bite felt spot on! 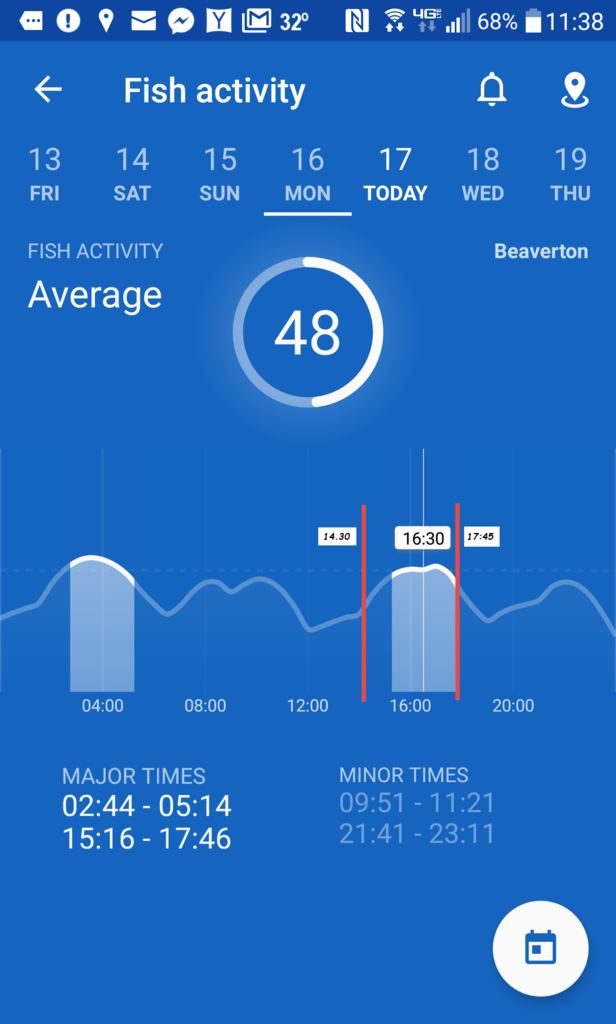 I load up the gear and head to the local hardware store for some tiny tungsten jig heads and some live waxies and we head out. Discussions on the way to the launch involved a strategy to forego our consistent spot way-points and start out where he left off on the last trip south of our last position on a muddy flat at 6-9 FOW.

Once out on the lake we noticed most of the drilled holes of the season were opened up from the recent rains and upper 30’s temps. The ice was still holding fast at 11-12”. We resisted the temptations to test holes for fish and headed straight to the last hot way-point.

Earl was immediately on the fish bringing in some quality panfish on the 1/64 jig/Live Waxie. The adjacent holes I was working seemed to be vacant and it took me awhile to tag my first fish… a nice Junior LMB.

I drilled a series of holes shallower and extending in the direction of earls spot and slightly past into the start of the lakes deeper basin at 28’ FOW. A group of young fishermen were fishing just 50 yds shallower than us with no bites.

I set the jig into a hole parallel to the depth Earl was fishing then started tagging the fish in an increased tempo. Of course this starts an elevated dialogue between Earl and I about the frequent tags and the other fishermen start moving closer occupying the holes I just cut…. Where is the Etiquette?”

Earl then tags his PB B.Gill on the jig/Live Waxie Combination. I follow suit with some nice near Master Angler P.Seeds and P.Gills. the young Amish fisherman then asks if he could have all the fish we were catching instead of throwing them back… still a little ticked about him jumping in and fishing my freshly cut holes a gave him a response about our catch and release policy for the day. Minutes later I asked him his name and called him over. Showing him the sonar and how the fish were represented on the screen he worked his bait in the depths and he was on the fish in moments.

I continued fishing adjacent holes blind and remained on the consistent hot bite. Earl tried the holes extending out in the basin to test for B.Crappie bite and continued tagging the quality B.Gills and P.Seeds. As the charted Major Activity period progressed on the Fishing Points App so did the fishing.

As sunset approached the young angler thanked me, gathered his fish off the ice and started his ice skate home. Earl and I packed up and headed to the launch leaving a still hot bite.

Just less than 3 weeks into the ice season we are greatly outdoing last years pace on numbers and quality. 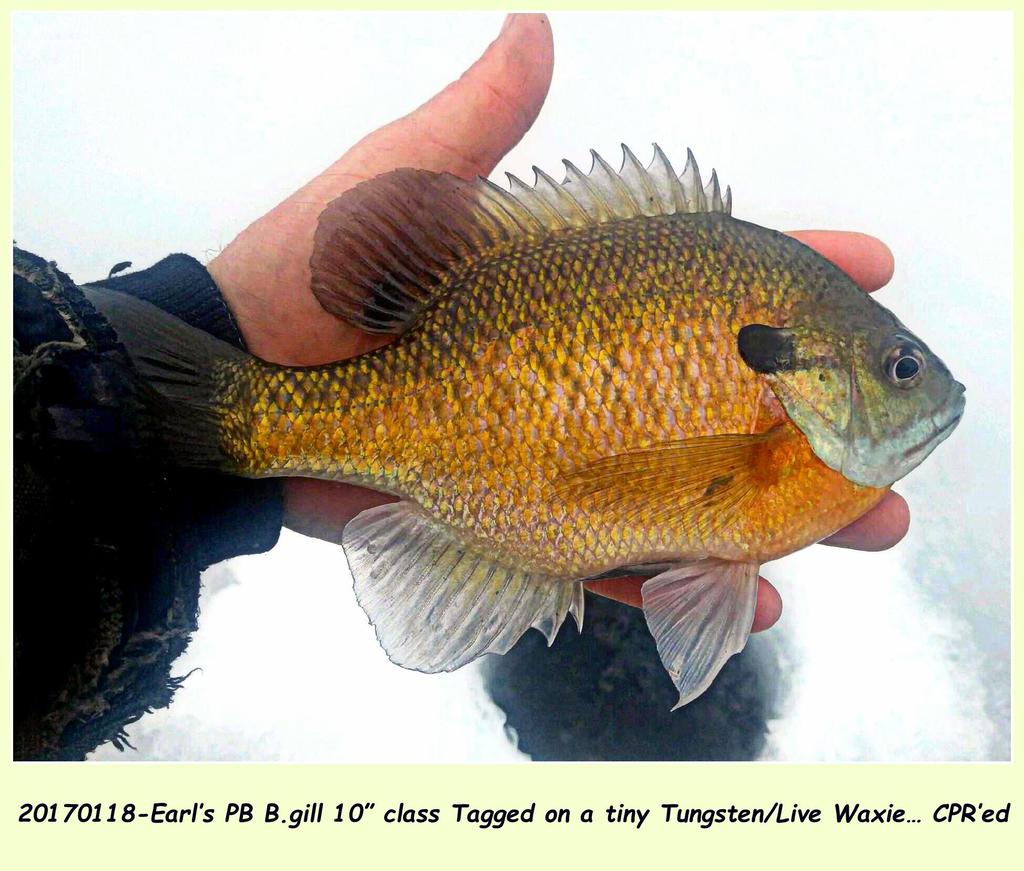 CPR’ed fish of the day 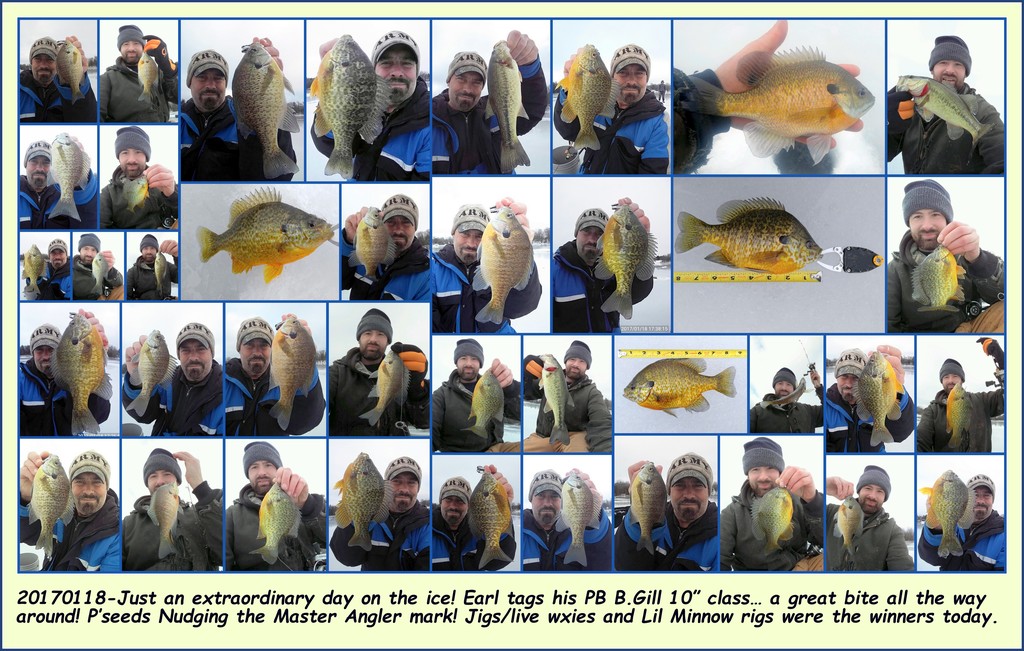 Looking at the forecast for the day trying to squeeze some ice-time on a minor or major Activity Period. The problem was scattered rain showers and the chance of  freezing drizzle. I saw a gap in the rain that corresponded with the uptick or swing on a major period late afternoon early evening bite. I jumped on the opportunity and made it to the lake in 20 mins and fishing within 30 .

the same holes we fished just a couple days ago were easily found with the GPS marked waypoints on the Elite 4 HDI sonar. Within minutes the hot spots were found.

I recognized a nice feeding pattern on some b.gills moving up and down in the shallow water column of 10’ with the sonar. Seconds into the depths with the tiny tungsten/live-waxie combo I was on the bite… it seemed one b.gill or p.gill after another with a good percentage hitting the 90% master angler rating.

The drizzle turned into a shower and I was quickly off the ice just short of my limit in numbers with just a couple short gills in the 6 in range. 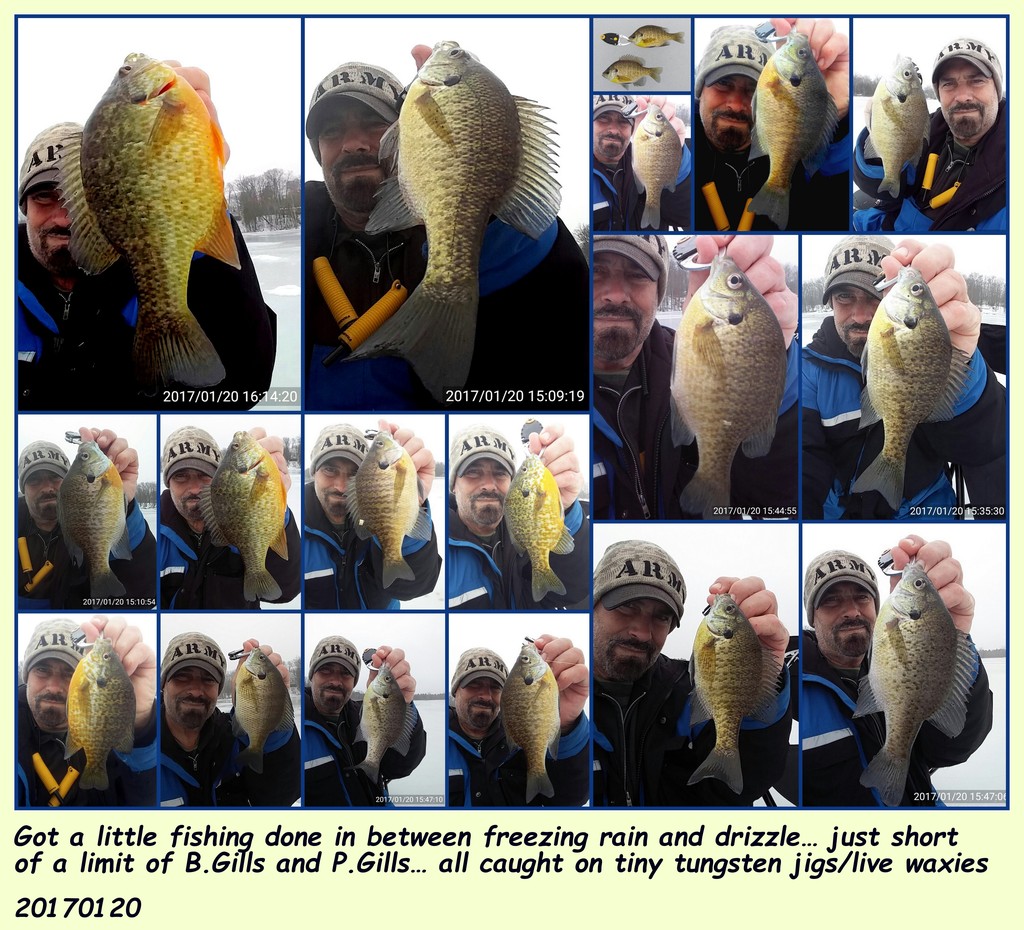 ive been nudging the Master Angler marks for b.Gill and p.seed lately thru the ice... hope it happens this season... it's still early. B.Crappie lunkers have been scarce... however i heard a father and son team tagged a 16.5" close to one of my waypoints on the ice the other day.

tried getting out today but too much rain in the forecast to deal with.

For those that have followed some of my history in line preference and methods… I have been swapping out duty with my ice line during the winter with the slip floating rigs during the open water periods the past few seasons. I am currently running the third ice fishing season on a $3.00 dollar spool of ice braid… that is cheap maintenance in anybody’s books. Judging by the lines condition it looks brand spankin new.

I made a trip to the Northwood’s Wholesale outlet today and purchased 2 more spools... I'm retiring the iceline to its present state on the winter spin reels and putting the new lines on the open water SlipFloat rigs. I upgraded in strength a notch in # strength to 5# and 8# braids. The 8# Suffix ice braid is within 2# mono dia spec. I felt there was a safety factor that had to be dealt with concerning the large preds ive been hooking lately in the dense pads. The 30” class Dog fish was the decisive margin breaker.

I’ll keep everyone posted how they perform this upcoming season on slip float duty. Great reports here, Ken! Wish we had safe ice, but I have to adapt with some extreme open-water/coldwater tactics, which closely parrallel the mid-summer tactics in my area...go figure.

I fish shallow, smaller public lakes and private waters along the Mason Dixon Line that are seldom over 8 acres and 8-10 feet deep. I seem to have better success with a "fixed float" approach rather than a slip-float effort, although I have used a slip float at times for fish that were deeper than my rod length. Lately, the bite is during the mid day hours, tapering off around 3: 30 to 4 PM. Some lakes fish good in the cold and others don't, even though I know the fish are there...just haven't cracked the code yet.

Sunlight and wind action plays an important role in the mid winter openwater panfish gig. I like a southerly wind, if possible, that banks or pushes warmer surface water along a shoreline that has a northwest to northeast exposure and recieves sunlight as well. Water temps increase as much as 3 to 5 degrees on late winter/early spring warm front conditions that get this warming effect as opposed to oither sections of the lake or pond. Fish tend to suspend and we get them often at the 4-6 ft depths below sensitive bobbers, and sometimes very close to the shore line. Bobbers almost never go under and they just trail off, pop or "hold" in the wind chop as the fish take the 1/80th oz jig/waxies and simply remain stationary with them. Challenging! No boat, no sonar, no ice cover to get out deeper and zombie-like fish tend to make it a rewarding day when you do make a good catch.

good luck in the rest of your ice season and be safe out there!

Thanks Jim! Sorry about your ice situation… we had safe ice for awhile but with all this warm weather the past week since yesterday it has been unfishable. The shorelines have thawed out from the bank about 10-20 ft and may take a couple weeks of the upcoming cold forecast to firm up once again. A colder than normal is forecasted for feb and march. So I should be getting some time in.

Yep that is a very successful pattern you have going there… some extraordinary fish you’ve been on!

Many fishermen do not realize how tough it is to show positive results when fishing from shore. For me… local shore fishing areas are tight and constricted.

… good luck with the upcoming seasons!

"Like fishing it gets fast and furious at times and they latch on….other times a bit…"
16 hours ago

"I guess that's something you have to become good."
17 hours ago

"Hey Bruce thanks…….we always put some pots out while crabbing but don’t leave…"
19 hours ago