I was fishing in some heavy-heavy-heavy vegetation with a friend recently when I stumbled on to something that really has potential to change the way I fish.

I was hoping that the members could read my story and provide input.

We visited a local pond right at sunup and the bass fishing was incredible. My partner was using a variety of lures, but a white mouse was the most effective and most likely to make it thru the heavy grass without getting fouled.

I was fishing a 3 inch green tube on a worm hook with no weight, which was intended to look like a small frog. We caught bass on nearly every cast, simply by moving these lures across the vegetation until they reached an opening.

After several fish, my tube was destroyed and I went for a replacement. I decided to try a smaller tube instead, a model that is typically fished on a jig hook for crappie.

The worm hook I was using was the smallest I could find, and although it looked a little too big for bluegill, I though I might stand a chance at crappie with it.

The smaller tube was too short to allow me to bury the hook but I was able to position it so that the tentacles surrounded the hook and offered some level of protection from fouling.

This smaller rig did not cast as far and did not have the dramatic action of the larger model, but looked promising.

What happened next made my day. About this time, we moved into an area where there was abundant, heavily matted, vegetation but there were a few deep openings every so often.

I casted into these holes and let the tube slowly sink, making very little movement as the lure sank. I began catching good sized crappie and bluegill immediately.

The lure would foul once in a while, but usually I either caught a fish, or could pull it slowly and it would pass thru the weeds without snagging.

Fishing a tube on a conventional jig in this habitat is out of the question. Anything that sinks fast gets fouled on nearly every cast.

My question is, can the unweighted tube rig be improved? I would like find a smaller hook that would be better suited and would also like to improve casting distance. Adding weight is probably not an option as the key seemed to be its ability to sink very slowly.

Permalink Reply by Cobra on July 20, 2011 at 8:15am
Have done the Texas rig on the small tubes using flytying Scud hooks. Short length, reasonably wide gap but without weight  it's more of a short range target approach. Not one of my favorite techniques but at times one needs to do what one needs to do. 2# florou and a 7' Eagle Claw Featherlite rod does OK

No doubt lighter line would help some. I currently fish with 6 pound line due to the harsh environments that I fish.

I will give this a few days and see what ideas are presented. One idea I have considered is to use monel wire and some type of filler to add a little mass to the rig, but still make it almost neutral in the water.

I friend got me in the habit of keeping small marshmallows in my tackle box. Not only are they bright white, but they add a little flotation to a bait or lure when needed. There is probably a more suitable material that would be just slightly heavier than water and small enough to fit inside a tube body.

These grass beds seem to be impossible to fish for panfish using conventional lures and even bait under a bobber would be pushing it.

I would consider trying a Mustad 3366 A or a 3366 G large ringed-eye Sproat hook (Netcraft has them).  The large eye would allow you to "pin" the tube through the hook eye with a toothpick.  If you need a little more mass for casting try inserting a split shot into the tube.  Follow with a small piece of EPS foam and pin that with another toothpick.  The use of a small piece of foam should counteract the shot weight and allow your offering to sink slowly.

I thought I would update the members about this rig. My wife I returned to the same fishing spot recently, armed with slightly modified weedless tube rigs fished on 6 lb test.

We used 2" tubes in a couple colors, rigged on a couple different styles of circle hooks. I did not get a chance to try badgerloader's suggestion of pinning the tube, which might have made a big difference.

Without the pin, fish often pulled the skirt down and I had to re-position it on the hook several times.

It helped to bend the shank of the circle hook near the top, to hold the upper part of the tube.  Also, I removed offset from the hooks.

At first, we added a small section of nightcrawler on the hook before tucking the barb up into the skirt. Later we used the lure without bait and it worked almost as well.

The rig does very well in heavy cover and we seldom got snagged on vegetation. Casting distance is limited, but this was not really a problem.

We were fishing from kayaks and were able to SLOWLY creep up to openings in the weeds and pitch the rig into the area. Often, several large bluegill or largemouth bass would converge and slam the lure. The water was clear so we could usually see the strike.

The rig seems to need very little action when casted into an area where fish were present. It also seems to do well in open areas. At the end of the trip, I was able to fish a deep hole and got bit on almost every cast, simply by letting it sink and paying attention to the line.

The circle hook being shielded by the skirt made hookup ratios a little lower than normal, but the number of bites we had more than made up for an inconvenience.  The most effective technique was to apply pressure slowly when fish grabbed the rig.

A kahle hook will also work for anglers that do not like using circle hooks. The last image shows the skirt pinned with a toothpick. 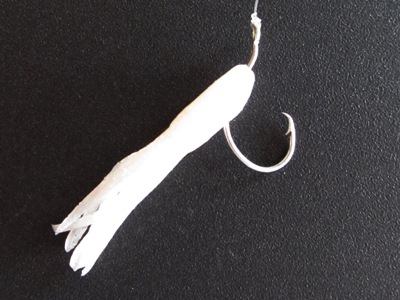 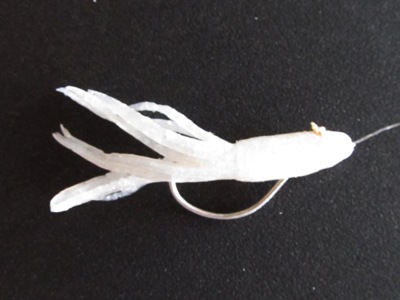 I think so too, especially if a smaller skirt was used.

The attraction seems to be in the tentacles. Without weight, as the body sinks very slowly, the tentacles spread out and look very "alive".

As others mentioned, foam can be inserted if a floating or totally neutral version was needed.

I used white for clarity in the photo, but brown to green patterns seem to look much more realistic in the water.

"Love them Bruce …….not discussed here a lot but I eat farm raised channel catfish…"
yesterday

"Thanks Jeff been too long .This day is what we needed!"
Wednesday

We’ve had multiple cold fronts back to back…..and accompanying rainfall which has pushed our…
Tuesday
4 Comments

"Thanks Bruce and John, we enjoyed a very comfortable morning with a good bite…..I might have…"
Monday