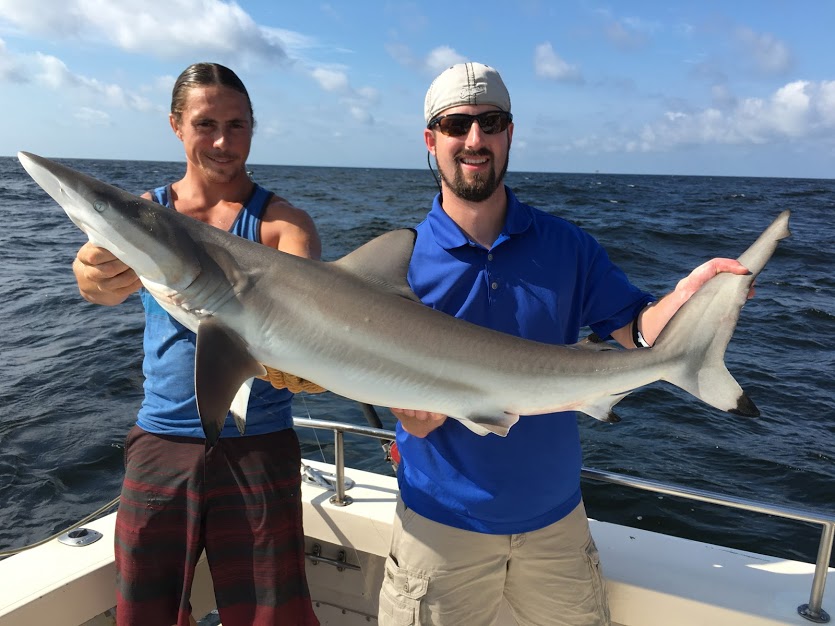 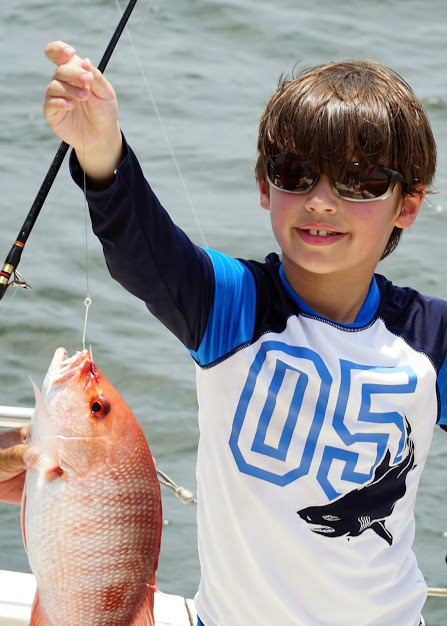 Daughter June with her first Red Snapper (She out fished us all!): Biggest Red Snapper of the day, Carl with Captain Bill: I have been catching some of the Shark Week programming on Natgeo Wild. I was really up-set while on the fishing trip because we were getting so many fish heads. After watching "When Sharks Attack" I understand better now.

We are programing the sharks to take our fish! The program pointed out how there has been a four times rise in shark attacks around areas where there is a lot of spear fishing and kayak fishing. If you went to the park everyday and if you see a stray dog and give him part of your sandwich, it won't be long till you can't walk into the park without 20 dogs sitting at your bench waiting for you to get there.

The same is true in Red Snapper fishing. The captain's know what rigs and buoys have a lot of Red Snapper schools around them, so they take their customers to the same places at least 4-5 times a week. The sharks don't want to expend energy chasing Red Snappers when it is so easy to just wait until we catch a big one. The fish is trying to get off the hook and not trying to get away from the sharks. Easy pickings, so the sharks just hang out around the fishing boats for an easy meal!

Are we doing the same thing when we go Bluegill fishing? Do we go to the same spots or our favorite spots when we go fishing?  There are so many new invasive species of predator fish now days, are we setting up for Bluegills to become targets? Snakeheads are showing up in our rivers and lakes. A man caught a piranha in Lake Woodlands last year. ( http://abc13.com/archive/8112667/ ) Don't forget the Gars! We should learn to mix things up instead of going to the EASY spots.

It has been a couple of weeks since I sent out an update. Last week I went to Dr. Nasser for a heart bubble test ( https://intermountainhealthcare.org/services/heart-care/treatment-a... ) which went well. I have one more heart test to do next week, a nuclear stress test. That will conclude my testing.  I had an appointment with my kidney doctor, Dr. Cherem today. He is very concerned with the blood test I took last Friday. According to him, my condition has gone from server to critically dire. He feels that I should go on dialysis with in the next two weeks.  He also feels that he can not put me on dialysis due to ethical and moral reasons. If I get on the liver transplant list, he will start the dialysis immediately, but without being on the liver transplant list, he will not put me on dialysis. You see, if I am not on the liver transplant list, there is no hope that I will survive, so it would be a conflict to put me on dialysis and then I would have to make the decision to stop it. So, I will finish my testing on Monday of next week, then Baylor will have to move quickly on making their decision. I just got off the phone with one of the liver doctors from Baylor. He said that if they get the results from Dr. Nasser by Wednesday of next week, the committee would make a decision by Friday. My life is in their hands and God’s. Please keep me in your prayers!

Nuclear stress test next Monday. My last test. Then the results will go to the selection committee.

Hope all goes well Clay my thoughts and prayers.

I'm praying for you Clay.

Well, I had my stress test today. This is the last test I had take so I have finished them all now. The results should go to the liver committee tomorrow and I should hear something by Friday. Thank you all for your Prayers and good wishes! I will post the results when I find out anything.

I really hope you get the good news you deserve Clay........that would be the best catch of the week for all of us!

Hope all goes well Clay and continued thoughts and prayers.

The results of the stress test shows that I have a blockage in a blood vessel at my heart. So, I need a stent put in. The heart doctor doesn't know if my kidneys will tolerate the die they use during the stent operation. Now, the kidney doctor and heart doctor have to have a pow-woo to see if I can have the operation. Evidently, without the stent operation, they will not recommend me to the liver transplant committee.

So, I am in linbo land again waiting for someone else to make a decision. Please keep the Prayers coming!

Clay again thoughts and prayers to you sir. Hope you have some good news in your near future I know waiting is the hardest thing to do.

"Indeed, thanks Dick!"
43 minutes ago

John Sheehan commented on John Sheehan's group Multi Panfish
"I have thought "Jack Perch " to be a Southern term for Jumbo Yellow Perch but this week,…"
5 hours ago

"Thanks for the feature!"
13 hours ago

"Thanks for the feature!"
13 hours ago

"That’s great news…..this gives you so much confidence when fishing…..enjoy Jim…"
13 hours ago

"Wonderful Jim……..that’s why we fish…..never know what the next cast has…"
13 hours ago